The summer to fall transition can be a blessing and a curse.

So much of the country is still in the heat of the summer, so early morning topwater followed by an afternoon of Froggin’, Flippin’ and Punchin’ on cover lakes or Texas Riggin’, Dropshottin’, Finessin’ or Crankin’ on structure lakes are all standard fare. 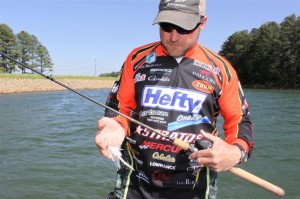 This is a time of year that an angler needs to find bait; the clouds of bait on the sonar unit, busting shad or bluegill darting in the shallows mean that bass will be present. Find bait, and an angler can become a hero, no bait, and you’re quickly a zero.

Fortunately, this time of the year is fairly easy to find several different kinds of species of baitfish all over the lake. The shad spawns of late spring through summer and the bluegill spawn of early summer have left a veritable plethora of swimming buffet carts in the water for hungry predators.
On problem; in a sport where matching the hatch is vital; finding a reaction bait that mimics the size of these small offerings can be difficult.

Summertime bass are often tricky, and being able to quickly cover water in search of biters is key. To Bella Vista, Ark. Elite Series pro Mike McClelland, this time of year means moving baits. However, not every moving bait is suited for the occasion.

“The bait this time of the year; especially in the shallows, can be very small,” said McClelland. “Finding the kind of crankbait or jerkbait to match it can be difficult, and that’s when I turn to a spinnerbait.” McClelland is referring to the War Eagle Finesse Spinnerbait that he designed.” 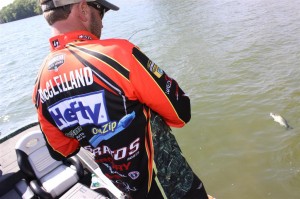 But, they can still be extremely effective in the summer through the fall when an angler strategically applies them in an unusual manner. McClelland thought of all of those factors when working with War Eagle on the Finesse Spinnerbait. “This bait has smaller blades, but is made to produce big vibration in dingy water,” he said. “It’s perfect for backwater areas around a variety of isolated cover on many lakes around the country.”

Where the Water is
McClelland said that he has a few prime areas that he really relies on the spinnerbait this time of the year. “I really like this in tidal waterways like the Potomac River, the St. Johns and the California Delta,” he said. “The incoming and outgoing tides create dingy backwater areas that a spinnerbait can really shine in.”

He also chooses them on river systems that feature skinny backwater areas that have a lot of stumps, laydowns or other cover, and he likes them in the backs of creeks on lakes that feature a lot of docks lining the banks. “Docks and brush hold bluegill,” he said. “I can use my finesse spinnerbait to cover water and make it look like a little cloud of small baitfish appearing near the cover.”

Gear
Because the Finesse Spinnerbait is small; it comes in 3/16 and 5/16-ounce models, McClelland said he finds a rod with good tip action is critical. “I was throwing it on standard models until last year,” he said. “But, I designed a 6’8” Falcon Stickbait Rod that I use to throw my SPRO McStick and McRip jerkbaits that I really like. It has plenty of backbone for setting the hook, but a light tip for making precise casts.” 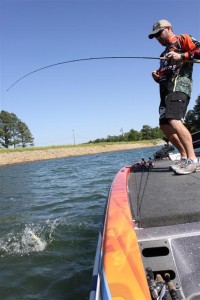 He pairs his signature rod with 6.3:1 Quantum Smoke reel, or the new 6.6:1 Quantum EXO that was released at ICAST this past July. He prefers a medium speed reel for not overpowering the diminutive lures. He chooses his line based on water conditions. If he is fishing sparse cover, he likes 14 to 16-pound-test line, but if cover is heavy, he upgrades to 20-pound-test; in both cases, his selection is Sunline Shooter Fluorocarbon.

Many people ask him about trailer hooks, and like line selection, McClelland uses one in sparse cover, but avoids it in heavier obstructions t minimize snagging.

Colors
Matching the prevalent baitfish is important, and McClelland said that the War Eagle line presents him many opportunities to make an effective selection. “I use shad colors in clear water with shad present, and bluegill colors with them around,” he said. “I also try to mimic the fleeing darting action of crawdads with my spinnerbaits, so I often change skirts to resemble crawdad colors.

It’s a matter of looking in the mouths of fish at what they have, or what they spit up that helps me refine my color choice.”

Retrieve
The six-time B.A.S.S. winner said that spinnerbaits have received a reputation for being idiot baits, but he believes that the moniker is not accurate. “Spinnerbaits catch fish on a straight retrieve all the time,” he said. “But, I try to re-create fleeing, darting action with my bait that creates a lot of flash and vibration changes. I try to wind, snap and twitch my blades to make a different action; especially around cover. 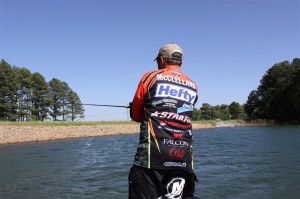 “I believe it’s the vibration of spinnerbaits that catch fish, followed by the skirt color,” said McClelland. “I can make single, isolated bass take a swing at this thing because it’s not overly obtrusive or noisy; it’s a great bait for doing just what I need this time of the year; catch a quick five, and then I can go looking for a bigger bite.”