To begin, I want to start by stating that I am a huge fan of B.A.S.S., the Elite Pro’s, the Elite Series, Bassmaster TV, Bassmaster Magazine and a fan of the sport. I think the new ownership of B.A.S.S. has traveled a rough road but that they also have a vision to grow the sport.

I also know how much influence and interest having the Elite Series here in the West has generated in the past. You couldn’t imagine the impact that the 2007 and 2010 Elite Series stops have had on the West. 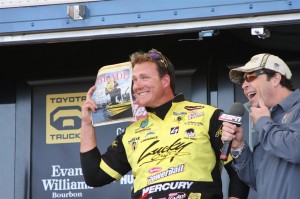 I don’t think we could count how many swimbaits were being thrown on Clear Lake after Steve Kennedy and Byron Velvick showed us how. We have to wonder about how many new anglers explored the Delta and Clear Lake after the Elite’s last visit nobody knew a thing about Power Poles and now you see them everywhere!
The influence of the Bassmaster Elite Series is immediate and intense. No other events have as much immediate impact in so many ways as does the Bassmaster Elite Series when they come through town.

Our fans have started talking about it again following the release of the 2012 schedule. Bass fishing here in the West needs that shot in the arm that having the Elites here brings to tourism, tackle sales, as well as boat and equipment sales; let alone the interest created by fishing media coverage and main stream media during the events. Getting that chance to meet, watch and have your picture taken with your favorite B.A.S.S. pro is still a big deal with so many of the fans.

After the announcement of the 2012 Bassmaster Elite Schedule and a recent interview with B.A.S.S. owner Jerry McKinnis where he stated that B.A.S.S. would have liked to bring the Elites back to California but with the current economy and fuel prices it would be too costly for the anglers to make the trip.

After listening to some of our Western fans and anglers after the schedule came out, I got to thinking and put some numbers together in comparison.
I went to symsys.com city to city mileage calculator and put together some comparisons: While many of the pros live on the coasts, the majority of them live in the Central time zone. So, for the sake of discussion, I put together a couple of different scenarios. 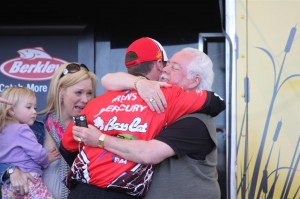 The first involves reigning Angler of the Year Kevin VanDam, who lives in Kalamazoo, Mich.

However, if an angler lives in Dallas, Tex. the following numbers present themselves.

When we consider the first two; back-to-back, tournaments of the 2012 season at the St. Johns River and Lake Okeechobee the anglers will have to drive 205 miles between the lakes each way.

By comparison, the back-to-back events at the Delta and Clear Lake like they did in 2010 the anglers had to drive 115 miles between the lakes each way.
This results in the difference of round trip of 410 miles between Palatka and Clewiston, Fla. and 230 miles between Stockton (Cal Delta) and Lakeport, California (Clear Lake).

Not knowing the full range of hotel prices in Stockton to Palatka we did compare double rooms at Roland Martin’s Marina in Clewiston and at Konocti Vista Casino in Lakeport.

Roland Martin’s Marina offers rates of $65 per night, while rates at Konocti Vista Casino are $59 per night 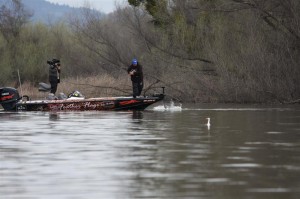 For seven nights, times the $6 dollar difference adds $42 in the West Coast’s favor. While factoring that non-resident fishing license fees in Florida are $47, in California they cost $65.32 putting $18.32 back in Florida’s favor.

Then we factor boat fuel. Okeechobee is the second largest natural lake in the lower 48 states and can be seen from outer space. It has 700 miles of shoreline. Clear Lake is 43,000 acres and is 19 miles long. Now everyone will burn gas in their boats, but the sheer size of Okeechobee will cause anglers to spend more in fuel in their outboards

So , when we factor truck fuel, lodging, fishing license fees for the anglers on the BASS Elite tour that based on anglers from Dallas, Tex. it really comes down to a difference of $23.68; which is not quite enough to buy one of the swimbaits that made Steve Kennedy famous on California’s Clear Lake. Or about the number of years between the time Mark Tyler broke the BASS Record on the California Delta which surpassed the previous record caught on the St. John’s River

Please don’t get me wrong; I think B.A.S.S. should make the trip to Florida’s waters and none better than the St. John’s and the Big O, but the 2011 season kicked off in Florida.

I’m not criticizing the efforts of the B.A.S.S. staff; putting together a schedule is no easy task, but my mathematics showed me that there was not as much of a difference as I had previously thought.

The West loves B.A.S.S., and our fans on the West Coast have proven that they will put large crowds in front of B.A.S.S. weigh-ins. Our fans and competitors would like the chance to participate in bass fishing’s greatest organization.

When scheduling doesn’t include the West, on any level, the Western fan misses the opportunity. Thus far, because of the economy and logistics, there are no Open events scheduled as of yet in the West and although we have a Classic Champion we have never had a Classic in the modern era. 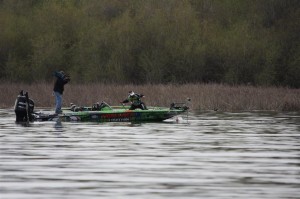 California is still one of the largest states for B.A.S.S. membership and hopefully that will continue to grow in the future. We have a large following of fishing fans out here on the West Side and they all want to see the best anglers perform on the best bass waters and our fishing economy here in the West needs it.

I am sure the numbers above can be stretched to fit many scenarios. My point is not to create argument or to criticize, but rather to show that it really doesn’t cost all that much more to travel West than it does to travel East.

Yes, there are the extremes from anglers having to go coast to coast, but overall, it’s comparable.

As a whole, we understand that it can’t be every year that B.A.S.S. brings the Elite Series out here, but we love it, our fan base loves it, and it can’t do anything but improve everyone’s business in the long run. Fans get excited, anglers promote sponsors, organizations grow, ratings improve and anglers consume more as a result.

It would be wonderful if there were more opportunities to do so in the Golden State as well as the rest of the West. We think everyone would benefit from it

Kent Brown is the host of the West Coast’s only radio show dedicated to bass fishing; Ultimate Bass Radio, heard on Sports 1140 KHTK in Sacramento. Brown is an industry veteran of more than 30 years, serving in many capacities throughout the fishing industry. He is a longtime tournament professional, and has two top 10’s in B.A.S.S. competition, including a fifth place on the California Delta in 2004, and an eight place finish on Clear Lake in 2005 in Bassmaster Opens. Ultimate Bass may be heard live on Saturday mornings from 5:00 to 6:00 AM on KHTK as well as streaming on his website, along with a full library of archived shows www.ultimatebassradio.com. He may also be heard on his live weekly appearances on Bass Talk Live on Fridays, at www.basstalklive.com.