9/7/2011 – Trophy bass hunters are a dedicated lot. It is not uncommon to find a serious trophy hunter fish for hours or days to get the bit of a lifetime, and then start it all over again after they get one to bite.

The pursuit of true trophies; no matter the size, species or area of the country requires dedication. While the pursuit of one big bite has a major draw, it can also lead to anglers wishing to test their mettle against other anglers. The obvious place for anglers to do that is in tournaments. 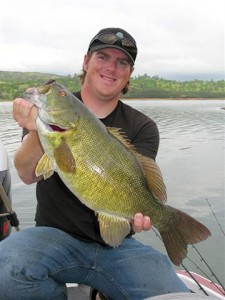 But, trophy hunting and tournaments often don’t mix. The techniques that trophy hunters use are often singly focused for one individual fish, and tournament anglers are looking for a higher average size of their quantity bites.

Allen has built a reputation for producing large numbers of big fish, and he has land dozens of fish over 10 pounds to prove his skill. Over the past several years, he has begun to venture into the tournament scene, and he has produced two wins and several high finishes in a newborn tournament career.

His secret is to not forget that trophy hunting has taught him to look for big fish and to get accustomed to how they operate.

Don’t Fish Different
“I’ve learned that heavy fish act very differently, and live differently than average fish,” said Allen. “Just because I’m fishing a tournament, doesn’t mean that I need to forget everything I’ve learned and start over in my style of fishing.” 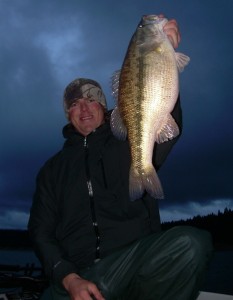 That style means Allen throws a lot of big swimbaits, big profile jigs and large topwaters designed to elicit a response from big fish. “I still fish those things in tournaments,” he said. “I may focus on the jig more, but I throw the big baits still, and I try to specifically target bigger fish areas.”

Don’t Get in a Hurry
Allen said that what he has noticed from being around other tournament anglers is that they fish too fast to focus on giant bass. Trophy hunters have learned that keeping things at a snail’s pace often produces the biggest bites. “I fish big swimbaits slowly, big jigs slowly and I try to keep them in the strike zone,” he said. A big, easy meal really makes bass commit.”

Even with the understanding of slowing down the presentation, Allen said that anglers need to slow their brains down too. “A tournament is a long day,” he said. “If you slow down and don’t let yourself start to panic, you can create the effect of elongating your fishing day.”

Allen has witnessed that around a certain time of each tournament day, anglers begin to worry about not having enough in the well. “It’s different for each angler, but most guys will start to panic and change their plan,” he said. “The average time is usually about two hours before weigh-in, and a guy that has been fishing big jigs on deep points will often turn to a shallow crankbait; and his day is usually shot by that point.

“I’ve found that if I stick to my plan, I can get the right number of big bites in only a matter of a few casts, so even if I’ve only got a few minutes left; I still have a chance.”

Jig Heavy
Allen believes that truly big fish live deeper year round than the smaller, faster schooling sized fish, and as a result, he loves a big jig. His first choice is a Dirty Jigs Pitchin’ Jig that he pairs with a Sweet Beaver, Yamamoto Twin Tail Grub or an Uncle Josh Phantom Craw. “I usually prefer the pork trailer because I believe it appeals to bigger bass,” he said. “I use brown most of the time, and carry other colors of jigs and trailers, but find myself throwing brown just about everywhere.”

He throws his jig on a Dobyns 765 Flip rod and a Shimano Curado 200 spooled with 65-pound-test braided line with a fluorocarbon or monofilament leader depending on water clarity or type of cover. His leader choices vary from 15 to 25-pound-test. 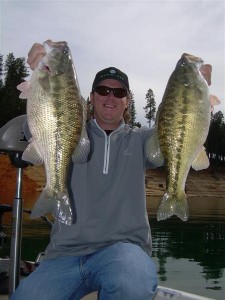 He works hard to keep his jig in contact with the bottom and moving slowly forward trying to mimic the crawling action of a crawdad.

Choose Carefully
He also offered one other tip to trophy hunters looking to break into tournament angling. “Don’t partner up with another trophy hunter for team tournaments,” he said. “If I think exactly like my partner, and we’re both committed to throwing a big bait all day long, we’ll overlook a second, or possibly even more productive pattern.”

“Overall, trophy hunters can fish their way, and post some nice results, they just need to think clearly, and stick to a plan; it’s worked for me so far.”

Matt Allen is the owner and operator of TacticalBassin.com, a site dedicated to sharing tips and trick to help educate and share the love of trophy hunting, and fishing in general. Visit him at www.tacticalbassin.com.