The majority of fishing fans have yet to become accustomed to the name Micah Frazier. But, if the FLW Tour pro has his way, that won’t last for long. 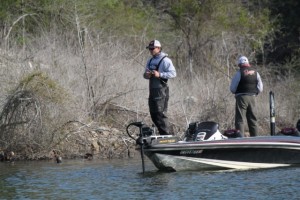 Frazier is a 24-year-old Georgia native who grew up south of Atlanta, and spent most of his fishing life fishing on the rivers and lakes of Eastern Alabama. A bass fishing junkie who works for his father’s company which operates a pair of gas stations near his hometown of Newnan, Ga., Frazier has quietly been building a career for himself on the FW Tour.

Like many FLW Tour pros, Frazier cut his teeth on the BFL and Everstart levels before making a leap to the front end of the boat. In 2011, Frazier fished his first full season on the FLW Tour as a pro and he finished 44th in the points, narrowly missing the Forrest Wood Cup.

In 2012, Frazier stepped his game a bit and on the strength of a second place finish at Lake Hartwell in the season opener and a pair of top 30 finishes at the Potomac River and Kentucky Lake, he qualified for the Lake Lanier Championship in 28th place. He has earned a total of 11 top 10 finishes in FLW competition, and has earned a total of $162,454.

Being an angler who resides near Atlanta, and so close to Atlanta’s freshwater playground at Lake Lanier, one would think Frazier is a deepwater angler with spotted bass tendencies. However, Frazier said he is more comfortable in off-colored dirty water impoundments.

“I’m a shallow water, power fisherman at heart,” he said. “It doesn’t mean that I can’t do the other things, but if I can get in skinny water and make the fish bite a bigger, more aggressive lure, then that is what I’d rather do.”

With that in mind, his favorite technique from postspawn through the fall is a swim jig. here is how he goes about his business.

The Setup
Frazier has a style of jig that he favors for swimming a jig, and it is one that has a head balanced for perfectly upright position when swimming, a nice weedguard that allows him to deflect off of cover, but won’t interfere with a hookset. His jig of choice is the 3/8-ounce Netbait Paca Swim jig. 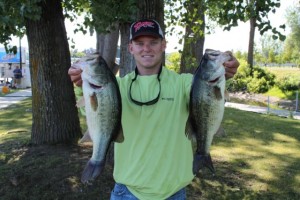 He pairs that with a Netbait Paca Chunk as a trailer because it has the right action. “The Paca Chunk really has a lot of action in the water,” he said. “The claws on that thing flap so hard that you can feel them in your rod tip, and that action draws strikes.”

He ties his jig on a Powell 704cb rod which is matched with a 6.4:1 Lew’s Speed Spool Tournament Pro reel and 15-pound-test Seaguar Invizx line. He said that the rod and the line are the perfect complement to each other for control and hooksetting, and the smoothness of the reel and the drag system give him the reliability and castability he needs.

In stained water he prefers to use a black and blue combinations, but in clear water a bluegill shade is his go to; a green crystal craw or Okeechobee Craw being the primary choices. He matches a green pumpkin Paca Chunk to that, but he dips the claws in orange dye to set it apart from his competitors. He uses a shad patterned jig and white Paca Chunk is there is an abundance of shad present.

Work the Jig
Just like any other lure, knowing when and how to use it is the key to having the best results with it. The swim jig is no different and Frazier has a specific set of factors that he looks for when fishing the jig. “I look for areas that the grass grows a little deeper into the water,” he said. “It might be an area where the grass on the shoreline is matted up. But, the grass just outside of that, where there are clumps of grass sticking up – that’s the perfect stuff.”

When he finds this type of area, he reels the lure just fast enough to keep it ticking the clumps, but not burying in them. He said that being just on the edges of the grass helps to elicit strikes from bass using the clumps for cover. “I try to keep the lure moving steadily and shake the rod tip a little,” he said. “If the bass are aggressive, they’ll eat it, if they are not, I stop shaking and let the lure do all of the work on its own.” 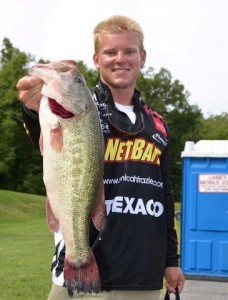 Tips for Success
One problem that Frazier has found with a swim jig is that the bulky skirts that come on the jig can limit the amount of action in a Paca Chunk. “The skirt can get in the way,” he said. “I change that by turning the jig over and cutting the inside portion of the skirt away so that only the outer strands remain. That allows the trailer to freely swim and that’s what I want.”

The other thing he suggested was for anglers to Super Glue their trailers on the jig. “Keeping the trailer secure really helps on a moving lure,” he said. “I lose less trailers, but more importantly, I can rip the jig free from the grass and the trailer won’t slide down. It helps a lot.”