Skeet’s Beat – Vacation with the Girls

We’re back at the house cleaning up all of the fun we had on our annual summertime houseboat vacation to Bullard’s Bar Reservoir. It always seems like I’m more tired after the trip than I thought I would be after all of the fun in the sun.

By the time you’re done with fishing and boating and tubing and swimming and barbequing, you’ve been on the go for a week straight.  It’s a lot of fun, especially that I get to spend a week with my family and we have friends up for the day, so it’s always a good time.

The people up at Emerald Cove Resorts on Bullard’s Bar are awesome.  They’ve got amazing houseboats of all sizes for people to rent for vacations, and the lake is really un-crowded, so you can always find a quiet place to moor the boat for the night.  It’s got great fishing for giant spotted bass too, check it out at  http://www.bullardsbar.com.

Speaking of giant spotted bass.  While we were up there, I was idling out of the marina when a guy in a little Tracker tells me he caught a 10-pounder.  Of course, I was thinking to myself that he was probably overestimating the size of his fish because it’s primarily a spotted bass lake, but I told him “awesome, nice job” and went back to the houseboat.

A little while later, he came pulling into our cove and asked me if I had a scale to weigh the fish. The marina didn’t have one, and neither do I because I use a balance beam to cull with on tour, but I told him I’d look at it and estimate the fish’s eight for him.

It was the biggest spotted bass I had ever seen up close.  I caught a six-pounder at Bullard’s a little while ago on an early prototype of the Havoc Sick Fish, and this thing was bigger.  I told him it was at least six and half pounds, probably pushing seven or more.  Whatever it was, it was huge. 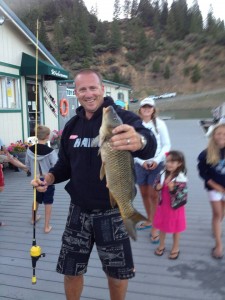 We also took the kids fishing for carp and giant bluegill around the docks.   We weren’t really supposed to be fishing there, but it was after normal hours so they let us do that for the kids.  I got to be the carp master and land everyone’s fish, so I got a workout on the docks.  The kids had a blast and all of our Skeet Reese Jr. Combos got a workout too.

Now that we’re home, we’re getting caught up around here and cleaning up stuff from the trip.  I’m also getting ready for the final event of the Elite Series event on Oneida.  Hopefully I’ll be able to put something decent together and get to Tulsa for the 2013 Classic.  Even better would be to put something great together and have a chance at winning that event.

I am heading to New York a week early to take out some of the management team from Dick’s Sporting Goods on a smallmouth trip up there.  I don’t know where we’ll go yet, but it should really be a great time, and I’m looking forward to it.

Other than that, we’re getting the kids ready for school which starts in a couple weeks and going to soccer tournaments and all of that stuff.  It’s kind of bittersweet to know that the summer is almost over and the girls will be heading back to school.  But, we’ve got one more family camping trip to go on and we’ll be looking forward to that.

Talk to you soon.