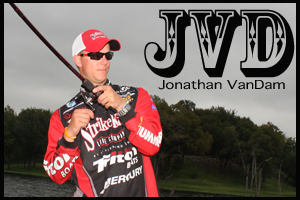 I’m just leaving Atlanta where I did a photo shoot for Lazer TroKar on my way back from the first two stops on the Elite Series schedule for 2011; my Rookie Year. The photo shoot went pretty well; I’m excited to be a part of their team.

My first event went pretty well; I finished in the top five at the Harris Chain, and I was pretty happy about that. My second event, on the St. John’s River didn’t go as well. It was a sightfishing deal and I didn’t do so well on that one. To be honest, I’m not much of a sight fisherman, so St. John’s got away from me a little bit.

The Harris Chain was a little bit different; I’m sure I was catching spawning fish, but I just couldn’t see them to sight fish for them. I was pitching a Strike King Perfect Plastics Game Hawg and another soft plastic worm into the reeds.

I weighed 14 the first day, 12 and half the second day, 19 the third day and 13 and a half on the last day to finish fifth; one spot behind Uncle Kevin.

Now I’m starting to think about Pickwick Lake, and the third stop on the schedule; I’ll catch up again next week.