Underwater Eyes with McClelland and Martens

We’re coming into the time of the year that bass begin to settle into their summer haunts. Those deep water ledges, humps brushpiles and rockpiles that will be their bedrooms, dining rooms and recreation areas for most of the hot part of the year. 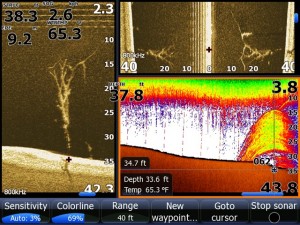 While bass have set up shop in the deeper areas of lakes across the country, a lot anglers typically do the same. There are those who go looking for deep water, find a depth they think bass are in, and start casting, hoping for bites. Then there are those anglers in the know. Those anglers that are skilled at finding and catching bass on offshore spots, sometimes a mile or more offshore.

In order to be successful out there, they need to rely on their underwater eyes; their fishfinders. Two of those anglers who excel this time of the year are Bella Vista, Ark. pro Mike McClelland and Leeds, Ala. pro Aaron Martens, a transplant from the West.

McClelland is most widely known for his skills with an offshore structure jig, and Martens ability to pick apart a piece of offshore structure with a spinning rod are legendary. However, their success begins even before they pick up a rod. It begins with their proficiency with their fishfinders.
“You’ve got to know what you’re fishing before you even make a cast,” said McClelland. “I spend time on my Lowrance HDS units making sure that there are fish there before I even make a cast.”

Martens agrees. But, it goes deeper than just knowing fish are in the area. “You have to know that the fish are there, the bait are there, and what kind of mood they are in,” said Martens. “I can tell all of that with my Humminbird 1198 before I even make a cast.”

Scouting
Both anglers revealed that they spend a lot of time in practice for a tournament using their fishfinders to locate schools of fish that they believe they can make bite. For Martens, that means identifying the bass, and the kind of baitfish they are near.

“If you spend enough time on the water, you’ll start to be able to know the difference between types of baitfish by how they appear on your screen,” he said. “Threadfin and Gizzard shad look different on the screen in both traditional and Side Imaging views. Knowing that helps me pick out how I want to target them.” 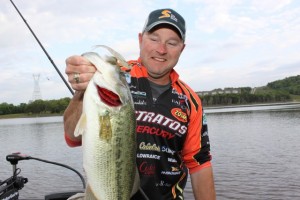 McCleland echoed Marten’s statement. “You can tell their species by their groupings in schools,” McClelland said. “Threadfin shad swim in looser schools, and white bass and crappie act different as well. White bass and crappie swim in the same areas, but crappie tend to be in smaller groups.”

While being able to know the difference between bass and other fish, the anglers can tell if the gamefish on their screens are active or not. Both anglers talk about how fish positioning tells them what mood the bass are in.

Outside of the obvious streaking fish across their screens, the anglers can see things that help them know if fish are near feeding mode.

Martens said that he can see bass that are not easily visible on his screen. “Sometimes bass rest on the bottom, and you can only see them as little bumps on a smooth bottom,” he said. “It’s not always easy to tell, but I can turn on my Real Time Sonar feature and it helps to show separation of objects from the bottom.”

McClelland also looks at how bass are positioned, and that tells him the mood fish are in. “If they are near a ledge, brushpile, or any kind of structure with bait nearby, the activity may be moments away,” said McClelland said. “If they are relating tightly to the structure or cover, then they are active, but if they are suspended away from it, I may not even fish there.”

Tips for Success
McClelland suggested that anglers keep their fishfinders in automatic mode for practice, but to learn how to use them in manual mode for tournaments. “When things are calm on the water, automatic works great,” he said. “But, when tournaments come, and there are more boats on the water, the other anglers’ sonar signals cause mine to reduce sensitivity. By going to manual mode, I can set the sensitivity and still get the readings I need. Yes, I see the interference on my screen, but I can look through it.”

One other tip McClelland offered anglers was to get used to what their screen is showing them. “If I am in practice and I get a school of fish fired up, I’ll drive over them and see what an active fish looks like on my Structure Scan,” he said. “If I know what active schools look like, then I’ll be quicker to identify if during a tournament when I come across it.” 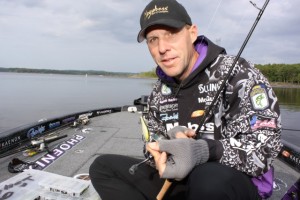 Martens said anglers should spend some time with their units at odd hours to get used to the settings. “I go out at night and play with my electronics a lot,” he said. “When the lake is calm, you can learn how to get the most out of all of the different settings, and that can help during a tournament.”
Martens also said that he feels today’s electronics are at their best in deeper water. I’ve graphed and fished for schools in eight feet of water, but they are better when the water is deeper,” he said. “I really like to fish with electronics in 20 to 40 feet of water, and you’d be amazed at what you can see in 80 to 100 like I used to back home at Castaic in Southern California.

“It’s really just a matter of spending the time to get to know your fishfinders and see what they can do. Before long, you’ll be able to tell what is happening right under your boat.”