QUITMAN, Texas (Feb. 20, 2022) – It was the Alton Jones, Sr., show for the start of Group B’s Qualifying Round at  the Toro Stage Two on Lake Fork Presented by Grundéns in Quitman, Texas. The affable Lorena, 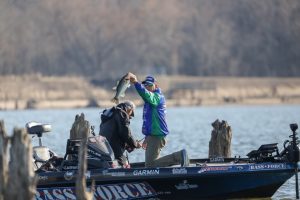 Texas, pro caught the most bass, the biggest bass, and the most weight, Sunday to grab the early lead for Group B. Jones caught 18 bass weighing 80 pounds, 7 ounces to pace the 40-angler field.

The six-day event, hosted by the Lake Fork Area Chamber of Commerce, the Wood County EDC, the Sabine River Authority and the Rains County Tourism Board, showcases 80 of the top professional bass-fishing anglers in the world competing for a purse of $805,000, including a top cash prize of $100,000 to the winner. The tournament is livestreamed each day at MajorLeagueFishing.com and the MOTV app, and also filmed for broadcast later this fall on the Discovery Channel.

“Whew, what a great day today was, and my hats are off to the guys who got close to me,” Jones said as time expired. “Today couldn’t have been better – it was much better than my practice – and the rest of the field still kept up. I still can’t believe I caught an 11-2 today.”

Jones is satisfied with what he discovered Sunday and thinks his pattern will hold no matter what the weather does later in the event. Wednesday’s Knockout Round and Thursday’s Championship Round are forecasted to be substantially colder.

“I expanded my area and feel like I can still catch fish here if the weather gets bad,” Jones said. “I’m going to keep mixing it up, fishing slowly and fast, because I know how the fish are positioned and know what to look for, even if they move around in here.”

Overall, on Sunday, there were 241 scorable bass weighing 904 pounds, 5 ounces caught by 39 pros.

The 40 Anglers in Group A compete in their two-day qualifying round on Saturday and Monday – the 40 anglers in Group B on Sunday and Tuesday. After each two-day qualifying round is complete, the anglers that finish in 2nd through 20th place from both groups advance to Wednesday’s Knockout Round, while the winner of each group advances directly to Thursday’s Championship Round. In the Knockout Round, weights are zeroed, and the remaining 38 anglers compete to finish in the top 8 to advance to the Championship Round. In the final day Championship Round, weights are zeroed, and the highest one-day total wins the top prize of $100,000.

Anglers will launch each day at 7:30 a.m. from the Oak Ridge Marina, located at 2949 TX-154 in Quitman, Texas. Each day’s General Tire Takeout will be held at the Marina, beginning at 4:30 p.m. Fans are welcome to attend all launch and takeout events and also encouraged to follow the event online throughout the day on the MLF NOW!® live stream and SCORETRACKER® coverage at MajorLeagueFishing.com.

The Toro Stage Two on Lake Fork Presented by Grundéns will feature anglers competing with a 2-pound minimum weight requirement for a bass to be deemed scorable. Minimum weights are determined individually for each competition waters that the Bass Pro Tour visits, based on the productivity, bass population and anticipated average size of fish in each fishery.

The MLF NOW!® broadcast team of Chad McKee, Marty Stone and J.T. Kenney will break down the extended action on all six days of competition from 7:45 a.m. to 4:30 p.m. CT. MLF NOW!®  will be live streamed on MajorLeagueFishing.com and the MyOutdoorTV (MOTV) app.