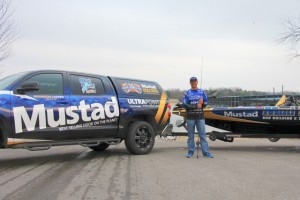 During his rookie season in 2014 Brandon began making a name for himself by performing under pressure, teaching people new fishing techniques and generally “doing things the right way”. On the brink of missing the Bassmaster Classic cut, Lester finished strong at the end of 2014. A ninth place finish at the Angler of the Year Championship secured his spot in the 2015 Bassmaster Classic, and made him the only first-year touring pro in the 56 man field.

“We see a bright future ahead for Brandon and appreciate having him on Team Mustad,” says Mustad Sales Manager Steve Tagami. “Brandon’s spirit, character, and attitude are just outstanding! The success in his first year as a pro is a great testament to his capability on the water, and he is also visible in a significant number of articles, videos, and other media pieces. All of this provides great insight about his knowledge, but ultimately points to a well-rounded individual with a tremendous work ethic and passion for the sport.”

“In my instructional articles and videos I always make note of the gear I use for each technique. I found during 2014 that all the baits I was using featured Mustad hooks so to now be sponsored by them is just ideal,” Lester said. “They listen closely to fishermen when it comes to new products so it is no surprise that Mustad is the world’s largest hook manufacturer.”

About Brandon Lester
From Fayetteville, TN, the 26-year-old Lester won the 2013 Bassmaster Southern Open Angler of the Year title and completed his Bassmaster Elite Series rookie season in 28th place. He fished two seasons for the University of Tennessee at Chattanooga. His website is www.brandonlesterfishing.com and social media pages are www.Facebook.com/proanglerbrandonlester, @blesterfishing on Twitter and Instagram.