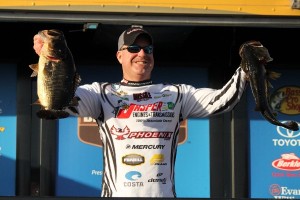 KISSIMMEE, Fla. — Standard opinion among the anglers fishing the Bass Pro Shops Bassmaster Southern Open #1 presented by Allstate was that the tournament couldn’t be won on Toho.

If you wanted big bass, Kissimmee was the place to fish.

Chad Morgenthaler proved them wrong, spending all three days on the host lake and rallying from ninth place to win the season opener.

In a tournament laced with some of Florida’s top anglers, the Coulterville, Ill., veteran Elite Series pro sneaked into the back door with a big sack on a day when the frontrunners struggled.

His last-day catch of 22 pounds, 3 ounces was more than enough to carry him to the top and give him a 52-7 total.

Kissimmee expert Bobby Lane, who had the second biggest bag of the day (14 pounds), finished second with 48-13, and Todd Auten of South Carolina was third with 48-1. Gerald Swindle of Alabama and second-day leader Brandon McMillan rounded out the Top 5 with 46-9 and 46-4, respectively.

“Being hard-headed and staying on Toho was really a key to my success,” said Morgenthaler, who punched his ticket to the 2016 Bassmaster Classic, providing he fishes the remaining two Southern Opens. “Everyone said you can’t win on Toho, but all of my big fish in practice came up here.”

Morgenthaler said he didn’t like dealing with the locks that provided entry into Kissimmee. Given the large field of anglers fishing the event, he feared locking down would cost him fishing time since most competitors would be fishing Kissimmee.

He stuck with one bait all three days — a Missile D Bomb soft plastic creature bait — that he pitched into isolated cover in 3 to 4 feet of water far offshore. The color was bruiser flash, a black/blue variety.

“It’s a good mid-sized bait, so I didn’t have to worry about whether it was too big or too small, and it would slither through the matted vegetation easily,” he explained.

He rigged it with a 3/0 straight shank Gamakatsu heavy flipping hook and a 1 1/2-ounce tungsten weight. Most anglers use 4/0 hooks with the D Bomb, he noted, but switching to the 3/0 improved his catch ratio considerably.

“I was targeting the main-lake areas that the fish were moving to from the wintering holes,” Morgenthaler described. “These were fish just starting to move up and the cold fronts we’d been having were holding them back. Some guys were catching fish that moved up but I suspected the majority of big fish were still in transition. The sunny, warm day today put them right where I was fishing.”

Ohioan Charlie Hartley recovered from a bad first day to win the Allstate Good Hands, Great Day award ($250) for moving from 158th place to 17th, thanks to a 20-pound, 15-ounce limit, the largest in the pro division.

Also Saturday, B.A.S.S. issued the following statement:
“Based on an investigation of an incident Friday during the tournament on Lake Tohopekaliga, B.A.S.S. today disqualified two anglers from the event. Pursuant to B.A.S.S. rules, Ish Monroe of Hughson, Calif., and Keith Poche of Pike Road, Ala., were disqualified from the Open. Additional penalties for both anglers may be imposed pending the outcome of additional investigations that are ongoing at this time. Because of those investigations, B.A.S.S. will not comment further on the decisions.”