While a glance at the sky from the protected view from indoors may have seemed like the area was greeted by Chamber of Commerce weather, day two of the 2016 WON Bass U.S. Open was anything but comfortable. Sure, the temperatures were mild, and it was sunny. 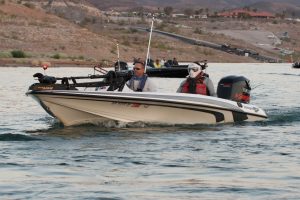 It was also very windy – to the tune of sustained 15 to 20 mile an hour winds with gusts eclipsing 35 miles an hour. The resultant wave action was enough to cripple vessels, destroy equipment and spirits, along with the leaderboard. It was certainly a day for shakeups, as none of the top five anglers from day one even cracked the top 15 on day two.

Capitalizing on the tough conditions was Clayton Meyer. Meyer brought a respectable 9.43 pounds to the scales at Callville Bay Marina, which brought his total weight to 17.87 pounds, enough to take the lead on a tough day; even for Lake Mead.

The veteran pro from Henderson, Nev. has a reputation for excelling in tough events, and he exhibited that today. “I knew the conditions were going to be really tough today, and I don’t have the amount of water to fish that some of the other guys do

, so I tried to make the most of it,” he said. “I really worked to fish what I have and not strive too much; I didn’t expect my day to end with me this high in the standings.”

Meyer reported making a long run and fishing one or two areas in a variety of ways. “I have five or six rods on the deck and I’m using them all,” he said. “I do have a few other areas I haven’t been able to hit yet because of the wind, which are supposed to lay down tomorrow; I’ll have to see what happens.”

While a majority of the field gambled on the winds not affecting their fishing, one angler who made a decision to hold serve was Tai Au of Glendale, Ariz. Au decided to stay close to the takeoff and maximize his fishing time despite having made a long run on day one. The result was a 9.49-pound limit that brought his total weight to 17.82 pounds, good enough for second place after day two. 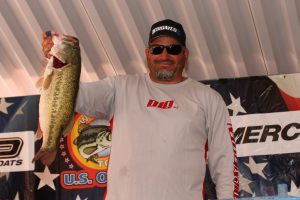 Not only did he change areas, he changed patterns as well. “I slowed down and fished the bottom today,” he said. “Hopefully the wind will lie down tomorrow, and I’ll be able to runback to my primary stuff and put another good bag on the scales.

Andy Manahl, from Mesa, Ariz. also proved steady, but unlike many, he decided to make a long run. His decision resulted in an 8.15-pound limit that put him in third place with 16.66 pounds. “I went to the best stuff I had, and it worked out,” he said. “I’ll go there tomorrow and try to make the best of it.”

Despite the flip flopping of the leaderboard, the true fireworks of the day were produced when El Cajon, Calif. pro Mike Walsh came to the scales. Walsh brought a 7.76-pound largemouth bass to the scales that not only earned big bass for the day, but is likely the largest bass ever weighed in U.S. Open history.

Walsh reported catching the monster on a “discontinued crawfish imitator” he declined to specifically name due to the event continuing. “I caught the fish in about 10 feet of water early this morning,” he said. “It’s a technique I use when the bite gets tough; it jumped two or three times and freaked us both out, it was an epic fight and will be something I’ll remember forever.” The fish helped him move from 102nd place to 21st in the standings.

Randall Bruce of Las Vegas added 3.43 pounds to his day one weight to take the lead on the AAA side of the ledger with 19.53 pounds. He is followed in second place by Bill Lansford of Needles, CA with 18.04 pounds, third place AAA Gabriel Romero of Henderson, Nev. with 17.92 pounds. Fourth place went to Teddy Snyder of Redding, Calif. with 16.71 pounds and fifth place went to Nathan Billetdeaux of San Tan Valley, Ariz. with 15.98 pounds.

Full Field Standings can be located below.

The Costa See What’s Out There Live Coverage will continue to bring all of the action from Las Vegas and Lake Mead throughout the three day event. You can go to WonBass.com to connect and watch the live streaming video on the following schedule – ALL TIMES PACIFIC.