By DAVID RAINER
Alabama Department of Conservation and Natural Resources

Since the lifetime hunting and fishing licenses became available in Alabama several decades ago, more than 80,000 people have taken advantage of this opportunity.

It wasn’t until the Game Check harvest reporting system was implemented three years ago that a problem with the lifetime licenses surfaced. It seems a large number of duplicate numbers are among those 80,000 lifetime licenses. This causes a major problem when the holders try to use Game Check, which will be mandatory for the upcoming hunting seasons. 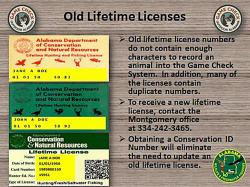 The Alabama Wildlife and Freshwater Fisheries (WFF) Division has been hard at work trying to find the duplicate numbers and notify the license holders when possible.

“Of the 80,000 some-odd lifetime licenses, about 48,000 had duplicate license numbers,” said WFF Director Chuck Sykes. “The reason we discovered the duplicates was we had people who called us and told us they had tried to use the voluntary Game Check to report a harvest and it wouldn’t let them do it. It turned out to be a two-fold problem. A lot of the lifetime licenses didn’t have the number of characters needed to access the system. If it was bought 20 years ago, it may have only six digits where it needs 10 to enter the system. The second issue was the database couldn’t identify it to a specific hunter because more than one person might have that license number.

“So we had to figure out a way to solve that problem. The first step was to let people know about the issue with the old licenses and give them an opportunity to have a new license issued. We’ve always allowed people who have lost their lifetime license to get a new license for $5, or, if it was damaged, they could send it in and we would issue a new one at no charge.”

The new system also affects those lifetime license holders whose licenses are in perfectly good shape and in their possession, but they don’t have the number of digits required to enter the Game Check system.

“We have been going back through the license sales and cross-referencing,” Sykes said. “I’ll use myself as an example. I bought my lifetime license in 1992. I tried to utilize Game Check and it wouldn’t let me. So I got a new license with a unique number. There were a lot of people like me. I still get a HIP (Harvest Information Program) license for doves and waterfowl. I buy a Wildlife Management Area license. I buy a trapping license and a state duck stamp. I asked our IT department to cross-reference those licenses with my old lifetime license number. This cross-referencing allowed us to identify those lifetime license holders that we previously had no contact information to reach these individuals.”

After several months of work, Sykes said the IT staff has been able to reduce the number of duplicate licenses in half, but almost 25,000 are still out there.

“Another way we decided to attack this issue – other states already have this – is to issue hunters an individual number that follows them throughout their lives,” he said. “It’s called a Conservation ID number.”

With Game Check mandatory this year, anyone who harvests a deer or turkey must report it through Game Check, including those who are exempt from buying a license – hunters under the age of 16 or over 64 and those who hunt on their own property. To access the Game Check system, those exempt from buying a license must acquire a H.E.L.P. (Hunter Exempt License Privilege) number each year or get a new Conservation ID.

“For example, if you have a 10-year-old child who hunts, they’ll need a way to access the mandatory Game Check system if they harvest a deer or turkey,” Sykes said. “They have to get a H.E.L.P. number each year until they can buy a license. The Conservation ID is a six-digit number versus a 16-digit number. So it’s a lot easier to enter and remember. So for that child’s lifetime, all they will have to remember is their date of birth and that six-digit Conservation ID number. It’s going to simplify the process greatly. Once they get the Conservation ID number, they never have to do it again.”

For those with the lifetime licenses without the required number of digits, WFF is offering two ways to remedy that situation. First, they can get a new lifetime license, or they can go online and create a Conservation ID and use that number to access the Game Check system.

Sykes encourages people to take advantage of the Conservation ID because there is no guarantee that the number will remain at six digits.

“I hope so many people take advantage of the Conservation ID that we may have to go to seven digits,” he said. “But, right now, we’re starting with a simple, six-digit number. If you use the Outdoor Alabama app on your smartphone to use Game Check, it will cut your reporting time down from about two minutes to 45 seconds.”

Purchasing a hunting license online or through the Outdoor Alabama app has another benefit as well.

“What we learned going around the state doing the Game Check seminars is that between 75 and 80 percent of the people who attended have smartphones,” Sykes said. “If you buy your license online or through the app, you do not have to carry a paper license. When I go to the woods, I might forget my bow release or binoculars or ammo, but I’m going to have my smartphone in my pocket. Now you can have everything on your phone. That includes your license information and your harvest record on your phone. I can prove I have a hunting license. I can prove I have a harvest record. I can prove I have Game Check.”

Some critics of the Game Check system insisted the reason for Game Check was to increase the number of tickets issued by the WFF Enforcement Section. Sykes said nothing could be farther from the truth.

“People don’t realize that almost our entire budget comes from license sales,” he said. “Only about 2.2 percent of our budget comes from fines. We hope we don’t have to write tickets for Game Check violations. We’re just trying to make it as simple as possible to be in compliance and for us to have access to data we need to make sound wildlife management decisions.”