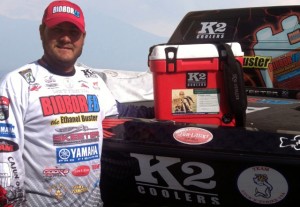 Crochet and K2 began working together in 2011 when the company formed.  The growth of both the company and the angler has taken a parallel path over the past couple years.  Crochet sits in 13th place in the Bassmaster AOY standings and the company is launching its second line called the Summit Series.  The first-edition offerings from K2 Coolers are a big hit across the Gulf Coast and Southeastern states.

Demand for the brand has been very strong and looks to continue with the Summit Series.  “We’ve been very pleased by the great response from customers and dealers since we started.  Everyone wants a premium cooler but not everyone wants to shell out the dollars the marketplace commanded.  We’re proud to offer the quality our customers want, but at a true value,” said Burton Angelle, President of K2 Coolers.

Crochet has proven the “premium cooler” claims over the past two years, competing with a K2 on board his boat.  “I’ve had a 30-quart K2 in my boat every day of the past two fishing seasons.  They’re durable, won’t fade and keep ice for an entire week.  Take my advice and get yourself a K2,” said Crochet, “but try to win mine first.”

Crochet has posted details of a contest to win a K2 Cooler on his Facebook page – www.Facebook.com/CliffCrochet.  The fan closest to guessing his weight at the final Bassmaster Elite Series event will win the K2 Cooler from Crochet’s Elite Series boat, autographed and stocked with gear from his sponsors – Luck “E” Strike, Falcon Rods, Humdinger, Biobor, Skeeter, Yamaha, Reins Tungsten, Rat-L-Trap and Cook’s Tackle Storage.

Based in Lafayette, LA K2 Coolers specializes in manufacturing high end, professional grade, and rotationally molded coolers/ice chests that are well-insulated and heavy duty for maximum ice retention and extreme durability.  They offer a wide range of sizes for all hunting, fishing, rafting, camping, tailgating and any other outdoor needs.  Visit www.K2-Coolers.com or call (855) 205-9994 for more information.

“The Cajun Baby” Cliff Crochet from Pierre Part, LA is fishing his 4th season on the prestigious Bassmaster Elite Series.  He is active on his Facebook page www.facebook.com/CliffCrochet and Twitter www.twitter.com/cliffcajunbaby.  His website is www.CliffCrochet.com.