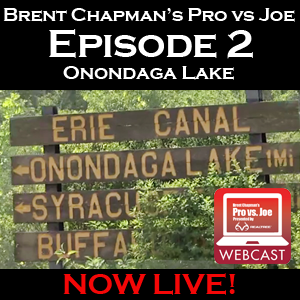 Syracuse, N.Y. – Episode 2 of the “webcast” show Brent Chapman’s Pro vs. Joe presented by Realtree has been released. In episode 2, Chapman squares off with Mike Pikulinski of Syracuse, New York on his home body of water Onondaga Lake. Onondaga Lake, which not long ago was contaminated to the point where both fishing and swimming were banned is on the mend and the fishing has responded well. Through the work of many agencies including Honeywell, who received an award from Audubon New York, for their leadership in the cleanup and restoration of Onondaga Lake, the lake has been restored and both swimming and fishing are once again permitted. Chapman and Pikulinski go head to head showing off the quality fishing Onondaga Lake has to offer. This Episode comes down to the wire. Can the Joe out fish the pro? You’ll have to watch it and see.

A new episode will launch each Monday for the next 11 weeks completing Season One’s thirteen episode slate.  Future Season One episodes take place in Missouri, Iowa, Tennessee, Georgia, Florida, and Kansas. Season Two challenges are being accepted now on ProVsJoe.com.