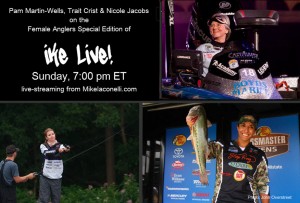 Pam Martin-Wells, winner of a WBT championship and four BASS events, has dominated women’s bass fishing for a while now. She is the all-time money ­­­­leader on the WBT and the only woman to make the top 25 in the Bassmaster Classic, against a field of top male anglers.

Trait Crist turned to bass fishing to fill the competitive void she felt after lettering in basketball, volleyball and golf in high school. She started fishing bass tournaments in 2012, and now—with eight sponsors backing her, she fishes the Bass Pro Shops Bassmaster Opens in hopes of qualifying for the Elite Series and Bassmaster Classic.

Last May, newcomer Nicole Jacobs placed 14th in a field of 187 co-anglers at her first tournament, the Bassmaster Northern Open #1 on Lake Douglas in Dandridge, TN. Like every pro, she studies the lake’s topography, conditions and pattern; practices with different lures, and develops a plan.

Ike Live! fans can receive an email reminder for the show by joining Ike’s Fish Heads Nation and can opt-in to the monthly newsletter for links to videos and periodic discount offers. They also can watch videos of previous shows at MikeIaconelli.com/Ike Live and watch or subscribe to clips on YouTube at Going Ike.

Audio versions of previous shows are now available on iTunes. To subscribe to the show, Click here and click “View in iTunes.” Choose iTunes as your application. Click “Subscribe” and new shows appear in your iTunes library automatically as they become available.

About Mike “Ike” Iaconelli
A South Philadelphia native now living in South Jersey, Mike Iaconelli fell in love with fishing at his grandfather’s side in the Pocono Mountains of Pennsylvania. He began fishing in tournaments after high school, joined the pro-am circuit in 1992 and turned pro in 2000. In 2003, he won the Bassmaster Classic. To date, he has won Bassmaster Elite, Classic, and Open championships, including the Bassmaster Elite on the Delaware River in August 2014, and earned over $2 MM in prize money.

He and wife, Becky, run The Ike Foundation, which provides fishing equipment to youth fishing club to “get kids fishing.” In addition, he and fellow fishing champ Pete Gluszek run The Bass University, which offers intense 2-day fishing classes that bring avid amateurs and professional fishermen together.