ORLANDO, Fla. – In the world of topwater bass baits, there are those that walk and those that pop. There are also those that spit and twitch. But when the Team Livingston bait-engineering team went to the drawing board to create a new breed of topwater baits, they asked themselves “Why not a bait that does ALL of the above?”

“We wanted to produce a topwater bait with attitude, and one that could be worked several different ways,” says Livingston’s creator and lead bait designer Robert Castaneda. “The Walking Boss is a totally unique topwater: it spits, walks, chugs and swims, with the added attraction of EBS MultiTouch technology. It’s a wicked combination.”

The 5-inch WALKING BOSS settles in the water at an 80-degree angle, with a slightly-concave chugger mouth that throws off a sharp spitting action at the start of the retrieve. The elongated body is designed to walk the dog, but as Team Livingston pro Stetson Blaylock points out: “You don’t have to know how to walk the dog, you can just twitch, reel, twitch the WALKING BOSS and get great topwater action.”

The WALKING BOSS PART II is a jointed cousin of the Walking Boss – same basic body structure and chugger lip – but the action is in a whole different category. In addition to the added vibration of the jointed tail and the extra boost of a feather on the back treble, the PART II also has a subtle lip built into the body, and slightly “blown out” cheeks that provide not only the classic “chug” of a walking bait, but also a pronounced, rhythmic “ploppity plop” commotion that’s been proven for decades to provoke savage surface bites.

“The WALKING BOSS PART II is a really diverse topwater bait, and a night fisherman’s dream,” says Castaneda. “The chug lip and flared cheeks are just classic components of great topwater baits, enhanced by the attraction of real baitfish sounds provided by our EBS Technology. Both it and the WALKING BOSS are just great multi-dimensional baits.”

NEW FOR 2015 – THE TEAM LIVINGSTON LINE: The WALKING BOSS and WALKING BOSS PART II are parts of the all new Team Livingston series of baits that will be introduced this week at ICAST in Orlando. The Team Livingston line combines new, innovative designs, with Livingston’s new EBS MultiTouch™ technology, which allows the angler to “program” the baits with four different sound options. Team Livingston baits are all designed with premium components (stainless steel split rings, advanced rattles, etc.) and all come with Daiichi 4x Strong hooks. 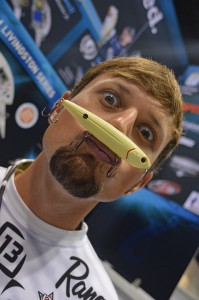 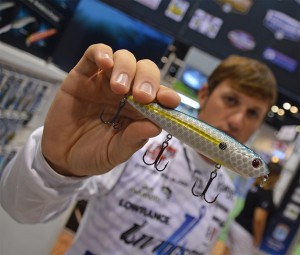