SMITH MOUNTAIN LAKE, Va., — Capt. Gary Jacobs, the owner of the new TowBoatUS Smith Mountain Lake, VA, fell in love with the lake when he vacationed there a while back. “It is gorgeous,” he said of the lake, which is in the Shenandoah Valley beneath the Blue Ridge Mountains. “One of the prettiest lakes I’ve ever seen.” 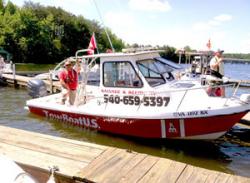 When he visited, Jacobs, who has been the owner/operator of TowBoatUS Lake Anna, VA, since 2010, was driving his own truck, which, he said, looks like a “rolling billboard for TowBoatUS.” A few local boaters asked him how they could get an on water assistance service on their lake. Fast forward a couple of years and TowBoatUS Smith Mountain Lake has been born. Jacobs and the licensed captains who work for him are now available 24/7 to lend a hand to any Smith Mountain Lake boaters who have a breakdown, run out of fuel, need a battery jumpstart or want help refloating their boat after a soft grounding.Much like an auto club for boaters, TowBoatUS offers on the water towing plans for freshwater boaters and anglers for just $67 a year that includes BoatUS or BoatUS Angler membership. Without a towing plan, boaters face costs that average $600 per incident nationally.Jacobs came to TowBoatUS in an unusual way. His road service company, L & G Road Service in Stafford, VA, was one of the first to join the BoatUS Trailer Assist Program, which provides towing and roadside assistance to trailer boaters whose boat trailer or towing vehicle breaks down on the way to or from the boat ramp. The service costs just $14 a year in addition to BoatUS membership.After that, adding the TowBoatUS on the water program was a logical next step. “I’ve spent my life on boats,” said Jacobs, a USCG-licensed captain and a certified volunteer firefighter who drives a fireboat on the Potomac River. “It ties into the work I’ve been doing all my life -helping stranded people on the road. Now, I can help people on the water, too. You have to treat every call like it was your own mother or father out there. I love being on the water, and it is great to be able to assist other boaters.”TowBoatUS Smith Mountain Lake is based at the Parkway Marina in Huddleston, VA, at the south end of the lake. The company has two boats, a 24-foot Duskee powered by a 150-horsepower outboard, and an 18-foot Sea Pro with a 115-horsepower engine. Both boats are fully rigged for towing and salvage, with powerful pumps, battery jump packs, dive gear and extra fuel, and have red hulls with big white “TowBoatUS” letters on their sides.Boaters can contact TowBoatUS Smith Mountain Lake by hailing on VHF channel 16, calling the company directly at 540-659-5397 or calling the BoatUS toll-free 24/7 Dispatch Service at 800-391-4869. Assistance can also be summoned via smartphone with the free BoatUS Towing App, and BoatUS is also the only towing service that offers satellite messaging services with the SPOT and inReach satellite communications services. To see the company’s location on a map, go towww.BoatUS.com/smithmountainlake.Boat Owners Association of The United States (BoatUS) is the nation’s leading advocate for recreational boaters providing over half a million members with a wide array of consumer services, including on water towing assistance provided by TowBoatUS and Vessel Assist. Combined, these two towing fleets offer boaters, anglers and sailors the world’s largest network of towing ports with over 300 locations and over 600 towing assistance vessels – three times larger than the closest competitor. For more information go to www.BoatUS.com/towing or call 800-888-4869.