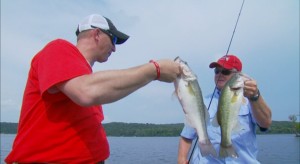 A few years ago, Strike King really took the marketplace by storm with the 6XD crankbaits.  The deep diving plugs really changed the way anglers targeted offshore structure during deep cranking tournaments and the Strike King team was at the forefront of those tournament dominating performances.

One of those anglers was West Memphis, Ark. FLW Tour pro Mark Rose who has rightfully earned the reputation as one of the best structure anglers on tour.  Any time the tour stops at a Tennessee Valley Authority lake, Rose is one that every angler waits to see what he weighs in.  In fact, Rose has six career FLW Outdoors victories, and all six have come from TVA lakes since 2007.  He also teamed up with Greg Hackney to win the 2008 PAA Corporate Cup event on – you guessed it – Pickwick Lake, another TVA impoundments.

Fishing with Rose in this episode is one of the truly great and talented people in the fishing industry.   Chris Brown, who is the Marine Brand Manager for Rigid Industries out of Phoenix, Ariz. was at the time, the Marketing manager at Strike King, and he paired up nicely with Rose to provide an excellent show.

Rose really does some fantastic instructing on this episode, so, if you ever wanted the chance to learn from a true master of deep water fishing, then sit back and enjoy this Pro Team Journal Rewind, courtesy of Strike King Lure Company and Shazzaam Productions right here on Advanced Angler.