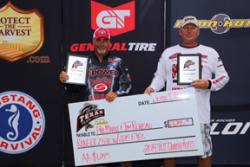 First-place finishers Tim Reneau (left) and Phil Marks (right) hold up their plaques and check at the TXTT Championship Event at Toledo Bend on June 7.

On day one, the team fished isolated spots with jigs, bagging 24 pounds of fish by late morning.“Our plan on day one was to start off flipping to some little isolated patches,” said Marks. “We thought it would take 50 to 54 pounds to win, so 27 pounds was our first goal.”With a decent limit in the boat before noon the team headed 20 miles up the lake looking to upgrade a few of their fish.“We ran up there and caught two seven pounders, which culled two four pounders,” said Marks. “We essentially had our limit by noon so we basically went practicing and found four or five more spots that afternoon.”Going into day two with a six-pound lead, the anglers relied on the same tactics from the previous day’s action.“Sunday, our goal was to get 25 pounds,” said Marks. “We had a six-pound lead, so we did basically the same thing.”Returning to their original spot from Saturday, the anglers quickly found themselves with 22 to 23 pounds of bass. Once the team culled to 25 pounds, they moved locations.“We fished some of the new spots we found on Saturday and ended up culling more fish. On day two, we culled around 12 fish with probably half being over five pounds.”Attributing their success to fishing one particular pattern, the anglers brought in a day two total of 32.10 pounds and won the tournament by a 19.30-pound margin.“We fished a very particular pattern,” said Marks. “We were just fortunate enough to run that pattern the last four hours of day one and it also helped us go big on day two.”Having fished every one of the TXTT’s tournaments, Marks has been impressed with the Texas Team Trail so far.“We were very excited when the Texas Team Trail came out three years ago,” said Marks. “I have fished every one of the events so far. It is the premier team trail in Texas.”Second-place finishers Joe Setina, of Pittsburgh, Texas, and Lamont Loyd, of Gilmer, Texas, won a total of $46,162, including a boat upgrade from the Ranger Boat contingency program and $1,162 in Anglers Advantage cash.Lee Yowell, of Ennis, Texas, and Brian Schott, of Longview, Texas, took home $2,996 for their efforts. Their 9.7-pound bass won the Big Bass award and an extra $500. The team’s third-place finish catapulted them to the top of the Lucas Oil Team of the Year. The anglers narrowly won by one point in a close Team of the Year race and will receive Lucas Oil rings along with paid entry fees for the 2015 TXTT season.The championship wraps up another successful season for the TXTT. The 2015 tournament stops will include some of Texas’ legendary bass fisheries and feature high payouts with unprecedented contingency opportunities.For additional information, anglers are encouraged to call 210-788-4143 or check out the TXTT website at www.texasteamtrail.com. Site visitors can register for events, review the television schedule, get official Texas Team Trail gear, view results and learn more about what’s in store for 2014.Along with title-sponsor Cabela’s, Texas Team Trail has also welcomed Lucas Oil®, Ranger Boats, Stratos Boats, Triton Boats, Evinrude®, Minn Kota®, Talon, RAM Trucks, Lowrance, Power-Pole, Amphibia, iON Cameras, Garmin, General Tire, SuperClean, Valley Fashion, Mustang Survival, Artic Ice and Protect the Harvest as official partners.