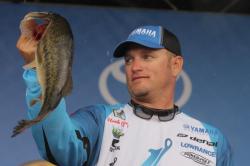 DETROIT– Yamaha Pro Hank Cherry claimed one of bass fishing’s toughest prizes Saturday, winning the Bassmaster® Rookie of the Year title at Michigan’s Lake St. Clair, the final event of the 2013 Bassmaster® Elite Series. Cherry, a native of Maiden, N.C., surpassed fellow Yamaha Pro Clifford Pirch for the award. The two anglers exchanged the point lead throughout the eight-tournament season. “This was one of my goals this season, and I’m very proud of being able to accomplish it,” said Cherry, after being awarded the trophy during Saturday’s weigh-in ceremonies in front of cheering fans and a national television audience. “It’s been a wonderful year, and I’m already looking forward to next season.” Cherry’s path to success in the Bassmaster® Elite Series began in 2012 when he won the Southern Open event at Smith Lake in Alabama, giving him an automatic qualification into the 2013 Bassmaster Classic®. A virtual unknown in the field of seasoned pros at Grand Lake in Oklahoma, the Yamaha Pro finished third, and then carried that momentum right into the 2013 Elite Series where he had two top-20 finishes and collected checks in six of the eight tournaments. His top Elite finish was fourth at West Point Lake. Those tournament results had already qualified the Yamaha Pro for the 2014 Bassmaster Classic® by virtue of his 14th place finish in the overall Bassmaster® Angler of the Year standings, but winning the Rookie of the Year title also gained him entry into the postseason Toyota® All-Star Week tournament Sept. 27-29 at Muskegon Lake in Muskegon, Mich. There, he will compete with just 13 other All-Star qualifiers for a share of the $100,000 prize package, including $50,000 to the winner. Yamaha Marine products are marketed throughout the United States and around the world. Yamaha Marine Group, based in Kennesaw, Ga., supports its 2,000 U.S. dealers and boat builder partners with marketing, training and parts for Yamaha’s full line of products and strives to be the industry leader in reliability, technology and customer service. Yamaha Marine is the only outboard brand to have earned NMMA®’s C.S.I. Customer Satisfaction Index award every year since its inception.