Shaw Grigsby sits beached on a sandy shore in the pre-dawn hours of Day 1 at the Bassmaster Elite Series event at famed Toledo Bend Reservoir. A pile of Quantum rods and reels to rig with the day’s lures sit in front of him. Behind him … amazingly clear memories.

When it’s mentioned that he did well here in the B.A.S.S. Louisiana Showdown in February of 2003 – he begins remembering every detail of his $14,000 cash-haul here on the TX-LA border like it was last week instead of eight years ago. 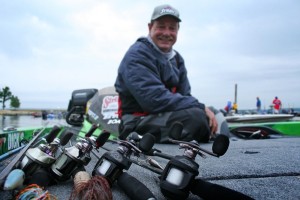 “Yep, that was a really special week. The water level was high. The aquatic vegetation was lush and green. I found one really special underwater point that I caught most of my 48-pounds of bass from that week,” said Shaw who is having a great 2011 season. He is currently ranked 4th in the Toyota Tundra Bassmaster Angler of the Year point standings.

“I figured the bass would be spawning, and so I went looking shallow in a bay, but they weren’t there, so I slid back out to where my boat was in 8-feet of water and found that magical point leading into the bay. They were stacked on that point, and I hammered ‘em every morning with a football jig. I wish we had Power-Poles back then — they’d have made sitting on that point even easier,” said the always upbeat Grigsby, who is now in his 27th season as a pro.

When asked how in the heck he’s able to so quickly recall the details of a tournament from eight years ago he responds, “Oh man, it’s scary, I can come to a reservoir like this and remember a single stump I fished a decade ago. In fact I was talking to my buddy Steve Daniels the other day about a log we caught fish off of in a tournament he and I fished on Lake Lanier in 1983 or 1984,” said Grigsby who mentions that he loves his new Quantum Smoke rods equally as much as he loves the Smoke reels.

Then he drifts even further back in time. “In 1972 I fished my very first tournament. I was 16-years old, and I remember being scared to death because the man I drew as my partner that day made the statement early in the morning that he didn’t want to tell me what he did for a living, fearing that he’d scare me. So all day long I was nervous thinking maybe he was a part of some really creepy profession. Finally, at the very end of the day he told me he was a high school principal. Then I’m thinking, big deal, I’ve never been in trouble at school in my life, yet he had me worried all day that he was somebody to be scared of,” laughed Shaw, as he strapped down the rods and readied for take-off 39 years after that day with the school principal as a partner.

Every memory made since then, clearly in mind as he idled out – possibly – toward that magical point.