As you can see in the attached photo of reigning Carhartt College Series National Champion Trevor Lo, preparing for the chance to win $300,000 in bass fishing’s most prestigious event can be a little mind-boggling. Especially when you’ve only fished a dozen tournaments in your entire life.

Lo is the equivalent of a 21-year-old kid that played a few rounds of golf the past two summers at the local course, and now finds himself competing in the Masters at Augusta National.

Only in Lo’s case, it’s not 9-irons, azalea bushes and Jordan Spieth. Instead, it’s crankin’ rods, rocky bluffs, Jordan Lee and KVD at the upcoming 46th Bassmaster Classic on Grand Lake ‘o the Cherokees near Tulsa.

“The Classic will be the 12th tournament I’ve fished in my entire life. That’s crazy. Crazy!” emphasized the University of Minnesota angler, realizing the made-for-TV storyline in which he would play the main character, is actually real life.

Surely nobody will doubt whether Lo deserves a spot in bass fishing’s most prestigious event with a chance to win six figures worth of pizza money and college tuition, but if you do – know this, he climbed through the same bracket virtually thousands of other college anglers were eligible to fish, and mostly, he’s the kinda dude you want to cheer for.

On his Facebook page days after his win, he wrote, “It’s the most rewarding thing to have your parents voice the words “I’m so proud of you.”” 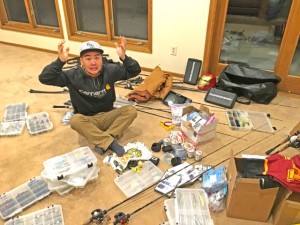 At a time when self-focus and entitlement could have easily taken over, a college senior, far younger than most of you reading this – expressed gut felt gratefulness simply for the chance to make his parents proud.

And then in the same post, he thanked former Carhartt Bassmaster College angler, turned influential media member and photographer, Shaye Baker, for “capturing this special life-changing moment for me and my family.”

Trevor Lo “gets it.” He’s rich with humility and knows that in fact cynical souls may question whether a college kid, who until now never paid much more than a hundred bucks to enter a Hmong Bass Club tournament, and a couple college derbies, should have a spot in the Classic.

This is also a kid who’ll be quick to tell you, that like many of us, he struggled to pass Chemistry, and can’t really afford to buy all the pricey Japanese jerkbaits several of his competitors are getting for free — comparable to playing the Masters with nine clubs, while everybody else has 14 in their bag. Indeed, he understands better than anybody – the long shot position in which he sits.

“I’m as prepared as I can be. Buckeye Lures gave me lots of jigs, 13 Fishing has helped me with rods and reels, and Z-Man has given me soft plastics, but yea, I could always use more jerkbaits,” admits Lo.

He took time in December to scout Grand Lake with his father who had a big hand in fostering Trevor’s passion for fishing. Neither of them had ever seen Grand Lake before, and Trevor jokes that Dad’s more familiar with pike than bass. A great contrast to Classic favorites Evers and Christie who live a short hop from the famed reservoir full of 4-pounders, and would both struggle to add-up the countless days spent – and checks they’ve cashed – from its waters.

“I may do awesome, and I may do terrible – but no matter what, I’ll take pride in the chance to be there, and hopefully represent the Carhartt Bassmaster College fishing anglers to the best of my ability,” says Lo.

And in America, it’s hard not to cheer for the first ever college kid to win the Bassmaster Classic, in the same way golf fans cheered amateurs Ken Venturi and Matt Kuchar to nearly pull off a miracle at Augusta.

“Cinderella story, out of nowhere, former greenskeeper, now about to become the Masters champion. It looks like a miracle. It’s in the hole! It’s in the hole!” – Carl Spackler (Bill Murray) the movie Caddyshack