Shaw Grigsby hollered “Oh crap!” and leaped from the front deck of his boat as though his Simms fishing pants were on fire. Fresh off another long day of battling the Alabama River’s outrageous current, Grigsby had forgotten to plug in his battery charger and rushed to find his 100-foot extension cord.

The spring to action exhibited a level of energy and athleticism that was in no way indicative of the 57 candles that will blaze on his birthday cake today. In fact, it’s as though the likeable and legendary Florida pro has a built-in battery charger that continuously throws 36-volts of positive energy to his heart and soul.

Or maybe it’s just the two jugs of caffeine rich homemade iced tea, and a 2-ounce bottle of Redfin Energy that ride with Grigsby all day in a Yeti cooler. NASCAR has high octane Sunoco to fuel their 650 horsepower engines. Shaw has the liquid equivalent in caffeine.

“I only drink the Redfin if I feel like I need it late in the day, but I drink iced tea all day. I love it,” he smiled. “Most of the time I just carry unsweet that I make with two tea bags and hot tap water in the hotel room. Sweet tea’s a treat. When I catch a limit of bass, I treat myself to a sweet tea,” explained the career long Quantum pro.

One jug lasts Grigsby one day. And the sweet tea this week is even more special because Alabama’s famous Dreamland BBQ gave it to him at the angler registration meeting Wednesday evening. 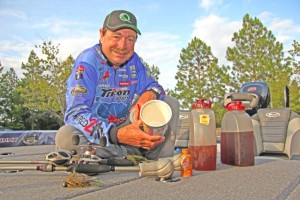 This tea thing of Grigsby’s doesn’t end with the jugs. Oh no, this is a system not unlike the wiring scheme that simultaneously charges his boat batteries. Shaw explains in great detail that by putting a large styrofoam cup from McDonald’s inside a large plastic cup from Wendy’s, that he achieves the ultimate in durability and insulation from which to sip.

“I keep a couple extra cups from both Wendy’s and McDonald’s on hand, but the first thing that will wear out on you is the plastic lids, so it’s real important to keep extra lids from Wendy’s,” explained Shaw with a seriousness that jogs thoughts parallel to Si Robertson’s tea fetish on the mega-popular TV show Duck Dynasty.

Grigsby sits in 16th place on his birthday as Day Three begins at the Bassmaster Elite Series Alabama River Charge presented by Starbrite. After catching a great 17-pound limit the first day, his limit on Day Two was much lighter at 11 pounds 9 ounces.

“I just ran out of fish. It’s a real finicky situation. It seems when there’s a fresh school, they bite, but then they’ll just shut off. I’ve got one spot where 4-pounders are coming up to eat on the surface, and when they do, I’ll throw a football jig on ‘em, and they’ll just smash it,” he grinned.

Mustache covered grins and positive energy never seem to fade with Shaw. Not even after 28 years as a pro, 15 Bassmaster Classics, and two battery draining days of battling the Alabama River’s brutal current.

It could be caffeine, but more likely something that can’t be carried in a plastic jug. Instead, intangibles such as appreciation, respect and gratefulness. “How can you not be upbeat getting to fish for a living? Do you know how many people would give anything to do this for a living?” asks the supercharged 57 year old, as though everyday is his birthday.