I told you last week that I wasn’t fishing for points or a check at the Shasta Lake Everstart Series tournament, and I didn’t.

I found some fish up the Sacramento River arm that were good ones, and I went after them. In fact, I had a couple of big schools of fish that had the kind of fish that could have put me way up the list. I could see them on my Lowrance HDS and Structure Scan, but I just couldn’t make them eat.

I spent most of the day up there on the first day of the tournament, and I came back with five little ones for just over five pounds. The next day I decided to try the other arms of the Lake, and ended up with five fish for around four pounds. 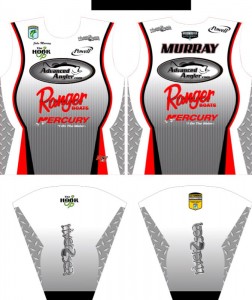 I used a Powell spinning rod, five-pound-test line and a wacky rigged worm with a River2Sea Tungsten Nail Weight in them, and I still couldn’t make them bite. I love tough tournaments; those are the easiest to win if you’re on your game. The slugfests are all about being the one to catch the most, biggest fish, not these.

The upside of the tournament, I got to knock my rust off a little, and I got to put my new Ranger Z521 and Mercury Verado 250 Pro Four Stroke through its paces; more on that in a minute.

The downsides of the trip were; I was away from Amy and T.J. for a week, I got a head cold in all of the rain and wind, and that is a really long ride from Shasta to Phoenix when you don’t cash a check.

Well, now I’m home with Amy and T.J. and I can mend and get ready for Lake Roosevelt next month. I’ve got a few guide trips and a couple of team events to do, but I’ll be thinking about Roosevelt too.

Back to the boat; I love it. I burned just under 25 gallons of fuel in three days of practice, and I saw the whole lake. I wasn’t running full throttle, but I was doing okay. Even during the tournament, running all the way up the Sacramento River arm, and then the Pitt, Squaw and McCloud Rivers on the second day; I still burned only 25 gallons in two tournament days. I think this new Verado Pro Four Stroke is going to help me save some money on fuel.

What was really cool was that it was pretty easy to get the boat to 70 MPH. My Ranger Z521 is a pretty big boat, and this motor pushed it pretty well; I can’t wait to do a little more with it and see what it can do even more.

I just got my jersey art back from the guys at Rayjus, and I think they look pretty good. I can’t wait to see the finished product, but I’ll go ahead and share the proof with you here.

If the video does not show up please download the player by Clicking Here.