Story and Photos by Dan O’Sullivan

As the overnight temperatures begin to fall, and the water temperatures follow suit, the one thing that you can be sure will happen is that bass activities will increase. Now is the time of the year that anglers will begin to more readily see boils of surface activity as bass begin to gorge themselves on shad that are beginning their fall migration upstream. 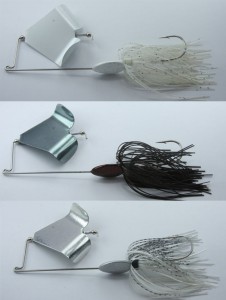 As clouds of baitfish begin to swirl on the main lake, heading towards the river and creek mouths, bass will intercept them and will often appear like a pot of water boiling on the stove. The bass can be worlds of fun to catch, and they can often produce solid limits of bass for a tournament angler in a hurry.

But, while the average size of bass in a school setting like that can be decent, there are relatively few times that this kind of situation produces a true kicker. These are the type of fish that are needed to propel a tournament bag from 14 pounds to 18 pounds, or give you that picture for the wallpaper of your smart phone or Facebook page.

One of the best ways to find that type of fish this time of the year is a buzzbait.

The flat bladed buzzbait is threaded onto the top wire of a buzzbait and it rotates around the wire creating a gurgling sound as the bait is retrieved fast enough to keep it on the surface. While the bladed portion of the bait is churning on the surface, the leadhead, hook and skirt is riding below and to the rear of the blade. This position gives the bass something solid to target when striking.

Equipment
First off, I believe that you should have a long rod with a strong backbone and a soft tip with a buzzbait. I prefer to throw them on a 7’6″ Wright & McGill Co. Skeet Reese Swimbait / Carolina Rig rod. Why? Let’s just say that in the past I learned the hard way from making a long cast, getting a big bite and not having enough leverage in the rod to set the hook.

I prefer this action of rod because it has a strong backbone, but about 30-percent of the rod bends on the load, making the rod have more of a moderate fast action. The reason I prefer this action is because I have taken to using braided line primarily when throwing topwater baits of any kind because it will help me set the hook on long casts. Basically put, any 7′ to 7’6″ rod with a medium heavy action will do. 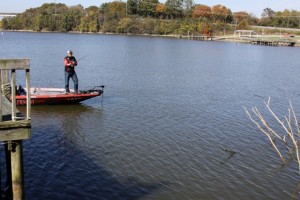 Again, I tend to use braided line, and for buzzbaits, I prefer to use 50-pound-test size. If I am mainly throwing over open water with a few obstructions, I prefer a smooth braid for castability; I choose Spiderwire Ultracast for this application. However, if I am throwing around weedy flats or near reeds, then I prefer a braid with some teeth to it. I line with a coarse braid like a Stren Sonic Braid or Sunline FX2 braid will actually act like a serrated edge knife under pressure and cut reeds or weeds more than a smooth braid which just tends to fold the vegetation over itself.

I like a 6.2:1 or 6.3:1 retrieve speed reel for most of my buzzbait fishing because it gives me the flexibility to speed up or slow down, unless bass are extremely aggressive and I need a fast, burning retrieve to trigger strikes, then I’ll go to a 7.0:1 or 7.1:1 speed reel.

Colors and Conditions
I basically carry three colors of buzzbaits. White, black and shad are the three choices I keep with me most of the time. I also prefer that the blades match the skirt color, not for any scientific reason, just because it gives me confidence in the bait.

In the morning, I’ll typically start out with the white bait, then turn to black as the sun comes up on most instances because I feel that the white helps visibility in low light conditions, then the black silhouettes against the sun better. My one exception is to throw a shad colored bait on really clear water when I don’t want the fish to get too good a look at the bait.

I really prefer for there to be a slight breeze on the water, but have also had good days on a buzzbait when there is no wind and the noise of the bait just seems to aggravate bass into striking. I like to look for cover edges and points to make my presentations, and it is always a good idea to bump the object with the bait, that always seems to create strikes more so than a steady retrieve.

Buzzbaits are great around grass flats, standing timber, boat docks, bluff walls and walls of reed or tule edges. If you ever come across a single stump off the end of a reedy island with current washing nearby in the Western end of the California Delta, by all means toss a buzzbait. By the way, I just started drooling a little as I wrote that sentence.

Retrieve Tips
The best advice for throwing a buzzbait is to keep your rod help in a ten o’clock position as you retrieve the lure with the reel handle. By holding the rod tip in an upwards position, you can control the speed of retrieve a little better than if the rod tip is pointed at the water. 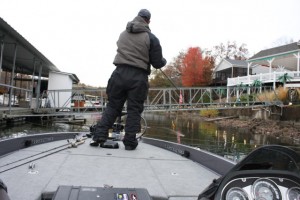 So, if you want a heart stopping experince, grab a few buzzbaits, a rod or two and head to your favorite lake. Pick out some likely cover and experiment with several casts around each until you get feed back. Don’t worry, you won’t have to wonder what a strike looks like.