story and photos by Jody Only

Many West Coasters within the industry know Kevin Stewart as Kramer’s 2011 “NBT” – making honors of the George Kramer Top 40 list is one thing; but to be noted as his “next best thing” puts an exclamation point on the pick. 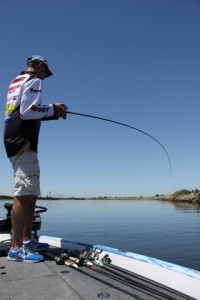 Stewart, a resident of Elk Grove, Calif. makes news within the sport again, this year as he decides to make the leap from a West Coast boater to a FLW Touring pro. As we’ve learned in many of the Beyond the Pond installments – “going pro” – is a big choice for an angler and a sacrifice for an angler’s family. Stewart checked in with Advanced Angler to share his experience weighing out the decision as he prepared for travel to the U.S. Open.

“It was definitely something that I had been thinking about doing and something that I wanted to do,” said the NorCal angler. “I saw the Tour schedule when it was released and knew it was time. My youngest just left for college and that gives me the freedom and the time to travel. I thought it was a good time, especially with the cancelling of the Opens.”

Feeling the 2013 FLW Tour schedule was “perfect” for him, Stewart also noted that he had not been to any of the locations, previously. “What I like best is that aside from Okeechobee, all of the other events are at places that are only about a day and half of travel from a central location that I can stay at.” Stewart added, “I have family in Central Texas, so it is going to work out well to stay there.”

Revealing that owning his own business was a big help in the “time-off from work” circumstance, Stewart also explained that his wife would have to pick up some of the slack that his absence caused. “Fortunately, I have several long-term employees that have been with us for 12-years or so and they are able to handle most things,” he added. “There are few things that would need me to return, but not much.” Even with the sacrifice that Mrs. Stewart is required to make with the couple’s business, her time away from her husband and the finances that must be spent to allow such an endeavor, Stewart noted he has his full family’s support. “They are behind me 100 percent,” he stated.

He was asked what he thought his goals should be as an angler that had only been competitively fishing since 2009. “I do feel that I have to pay my dues as a 45-year-old rookie on the tour that has never been to any of the lakes,” he stated. “My first year, there will be a learning curve and my 2nd year will be more tell-tale. I wouldn’t give up if I didn’t make the Cup on my first year; but that is my primary goal. I want to qualify for the Forrest Wood Cup as a rookie and then the next year, I want to place in the Top 50 and qualify again.”
Planning for practice time, Stewart anticipated putting in four to five days on the water outside of Official Practice days and around Off Limits days. This practice time is in addition to the Official Practice days allowed at each event. “I really want no less than eight days minimum to learn each lake, find out where to stay, where to buy tackle and other things that will make it easier to fish during the tournament,” explained Stewart. 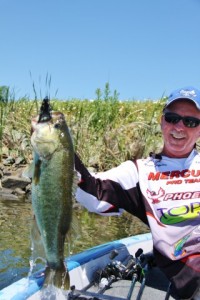 Stewart noted he was building his network of information for the foreign competition sites and had already started garnering local data; but did say he wouldn’t succumb to the area dock talk. He also commented that he expected the bill to “live the dream” would run upwards of $45,000 annually and that he had secured some associate sponsors; but would announce a primary sponsor at a later date.