Because we have access to the pros, our readers will periodically ask questions from about certain things via email, through our Facebook and Twitter accounts.  We get equipment questions, fishing situation questions, habitat questions and much more. 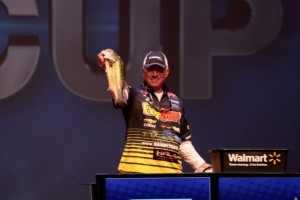 We had typically just answered the reader directly, but realized that more people might have the same questions, or would like to learn something from the pros that they had never even considered before.

Our answer was to begin a series here where we could track down some pros, ask them the reader’s questions and put them together in a format that ould allow everyone to read and learn from them.  Below have four from readers on our Facebook and Twitter accounts.  We have matched the questions to pros who we felt would give the reader the answer they were looking for.

Question – from  captblackeagle  on Twitter – @AdvancedAngler When fishing fresh water in Florida, what temp should the water be for the most active fish? Bluegill, bass, etc.

Pro – FLW Tour pro Randall Tharp from Gardendale, Ala.  While he is from Alabama, Tharp has earned a reputation as an assassin in the state of Florida.  His familiarity with heavy cover – grass fishing in particular – and a tireless work ethic have made him one of the favorites when the tours hit the Sunshine State.

Answer – Florida is a really unique place.  It seems that the fish there tend to like things a little warmer than the rest of the country.  Of course, it can get too warm for the fish to be active, but when the water temperature is the range from the mid 70’s to low 80’s is when the fishing is best.  That is for the bass, and the bluegill seem to like it a bit warmer.

When FLW opens our tour season there, I think it is a bit earlier than the fish really like, and if we were to go in March or April, I think you’d see every record for weight broken.  So, right 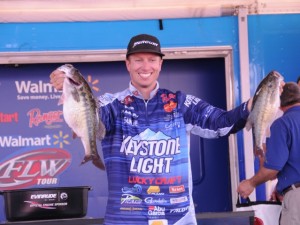 now is probably the best time to get on active fish in Florida.

Pro – FLW Tour pro Brent Ehrler from Redlands, Calif. is one of the craftiest and versatile anglers on either tour.  His skill with a spinning rod is what won him the  2006 Forrest Wood Cup and several FLW Tour events, including the recently completed tour stop at Lewis Smith Lake in Alabama.

Answer – I wouldn’t say they aren’t used, but I can say that they aren’t used much.  There are certain cases when fish are feeding on really small forage that a spinner works really well.

However, with today’s bass lures there are generally better offerings that appeal to and catch quality fish.  Companies like Yamamoto, Lucky Craft and so many other great companies have developed unbelievable ways to catch fish under a variety of conditions.

Having so many quality options designed specifically for bass makes it really hard to tie on something that was really developed to catch other species.” 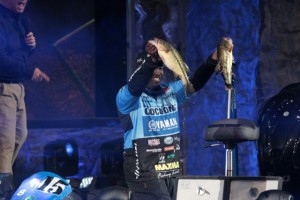 Question – Denny W Powers from Facebook – When you’re fishing an area how much time do you give the area before moving?

Pro – Elite Series and FLW Tour pro Ish Monroe, from Hughson, Calif.  Monroe is a shallow water specialist who is used to fishing for five bites during a tournament day, so his patience level is high.  The four-time B.A.S.S. and FLW winner has experience in gutting it out in areas looking for the best bites to materialize.

Answer – There really are a lot of factors that can go into a situation like this.  Things like tide, sun, wind, rain runoff, boat traffic and other things will affect my decision making here.

However, the best way to tell you to look at it is to go with your gut.  If I’m fishing an area that I did well in during practice, then I’m going to give it as much time as I can during the event – especially if I know the area is holding big fish.  If that’s the case, I’ll stick it out as long as I can, until I feel like it is just not going to produce.

Making those kinds of decisions is all about fishing in the moment and being in tune with everything in your area.  But, if you start second guessing where you are fishing, your gut instinct from your experience on the water is trying to tell you something, and 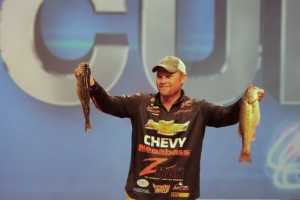 you’d be smart to listen to it.

Question from We Love to Fish on Facebook – Can you provide tips on how to share the passion of fishing with others?

Pro – FLW Tour pro Luke Clausen of Spokane, Wash. is one of only a handful of anglers to have won the Forrest Wood Cup and the Bassmaster Classic. Clausen is an extremely competitive angler who just loves to fish at his heart.  He can be found chasing everything from largemouths on tour, to smallmouth on the Columbia River in his home state and everything in between.

Answer – The best advice I can give anyone who wants to share their love of fishing with another person is to get them out on the water and let them experience the thrill of catching a fish.  I would try and find a time when fish – any fish – are active and biting, and take people out there to get them started.

To ask your own questions, visit our Facebook and Twitter pages, post your questions and we’ll get them answered in a future edition of The Pros Know.