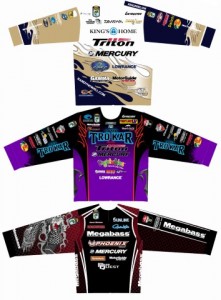 Bull Shoals, AR – Bassmaster Elite Series anglers Brent Chapman, Randy Howell and Aaron Martens will be flying new colors on the first day of the Bull Shoals event.  All three professional’s will be wearing their jersey’s designed with colors to represent local or nearby sports teams on the first day of the event. These jerseys will be sold on eBay over the next week with all proceeds going to charities that you can help select.

All proceeds from Howell’s jersey in the colors of the St. Louis Rams will go to the King’s Home, in Alabama. Howell stated, “Timmy Horton came up with the idea for many of us to wear green jersey’s at Falcon lake for the Sandy Hook Elementary school and that was a great idea.  We thought it would be nice to extend that to other fantastic charities and have some fun with local team colors, as well.  All the proceeds from this one of a kind tournament worn jersey will go to the great people of King’s Home.”

Chapman, whose jersey is in the colors of the Kansas State Wildcats, will also add a Facebook poll that will allow his fans to pick the charity that will receive the proceeds. Chapman explained, “There are so many charities out there doing extraordinary things for people, and they all need financial assistance. If we can help one of them even a little bit, it’s worth it.  I hope the Kansas based fans of mine get on eBay and bid this jersey up for a great cause.  The best part is, they can also pick the charity it will help on my Facebook page

Martens will be wearing the colors of the Arkansas Razorbacks. Like Chapman will be holding a Facebook poll to choose the charity that will receive the money raised from the eBay auction.  Martens stated, “Lesley and I try to help as many charities as possible each year.  We know every dollar matters to these charities, and if wearing a local team color on the first day of the event can help, we are all for it.”

You can visit the following Facebook pages for links to the eBay auction starting on Thursday, April 18th at about noon.  That’s when voting for Brent and Aaron’s charities will also begin.