LA CROSSE, Wis. — Casey Ashley has only a slim lead following the first round of the Plano Bassmaster Elite at the Mississippi River presented by Favorite Fishing, yet he almost oozed confidence as he left the weigh-in stand today.

“I feel like I’ve got another shot at winning,” he said after weighing in a limit of four smallmouth and one largemouth weighing 17 pounds, 10 ounces. The Elite pro from Donalds, S.C., knows that feeling, having won the 2015 GEICO Bassmaster Classic presented by GoPro. He aims to add another $100,000 to his career total on the Mississippi River this week. 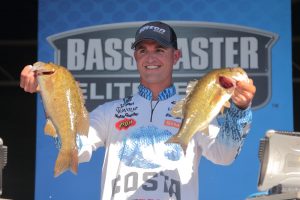 Casey Ashley of Donalds, S.C., takes the lead on the first day of the Plano Bassmaster Elite at Mississippi River presented by Favorite Fishing, bringing 17 pounds, 10 ounces to the scales on Thursday.
Photo by Seigo Saito/Bassmaster

Nevermind that two other skilled young fishermen are breathing down his neck. Ott Defoe of Knoxville, Tenn., is second with 17-7, and Jordan Lee, the former College standout from Grant, Ala., is third with 17-2.

Reigning Classic champion Edwin Evers of Talala, Okla., is fourth with 16-13, and Brandon Card of Caryville, Tenn., rounds out the Top 5 with 16-9.

DeFoe revealed that he has two great spots. One gave up three of the bass he weighed in today, and the other produced two.

They’re good enough holes to produce another remarkable catch, he said, but neither will hold up through the end of the tournament Sunday. That’s especially true because one of those two spots yielded most of Card’s fifth-place limit.

Card, who lives just 20 miles from DeFoe and has competed against him for years, said he saw DeFoe nearby when he found the place in practice. “I figured Ott would find it, too,” he said.

As Card arrived at the spot today, DeFoe was finishing up his limit. “He was smiling and I knew he caught them,” Card related. “I said, ‘Is there going to be a strategy we need to work out?’”

To his credit, DeFoe invited Card to finish out his limit there. Card said he expects the two friendly competitors will be able to work out a schedule to share the hole by the time round two begins Friday morning.

In contrast, Ashley said none of the 106 other Elite anglers is fishing anywhere near his areas. “I found it the first day of practice and went back to it this morning,” he said. “My first fish was a 4 1/2-pounder (a 4-7 that currently leads for the Phoenix Boats Big Bass Award), and I caught my limit there in about 20 minutes.”

He tried other, similar locations and caught good-size bass — 3- and 4-pounders — at most of them. After he had culled up to the 17-10 limit, he vacated the area and went scouting for more spots in another part of the river.

Lee, too, feels confident about his chances in this, the final regular-season tournament of the Bassmaster Elite Series. A second-year pro on the Elites, Lee did not have the benefit of two previous tournaments on the Upper Mississippi, and his practice fishing wasn’t especially good this week.

“The key was just being patient,” he discovered. “I caught four on four casts at about 10 o’clock in a place I thought I was only going to catch one, and they were all good fish. It told me to really slow it down. I did and hit a couple of little groups of fish and was able to cull up.” He found several other hot spots fitting his pattern, and he expects them to hold up in the later rounds.

The angler with the best chance of claiming that crown, Gerald Swindle of Warrior, Ala., helped his cause by climbing into 24th place today with 13-9.

The full field of 107 anglers will take off from Veterans Freedom Park in downtown La Crosse at 6:15 a.m. Friday, with the weigh-in taking place at the park at 3:15 p.m.