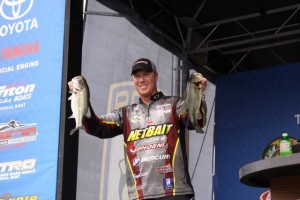 Vinson, a fifth-year pro from Wetumpka, Alabama, will be an impressive representative of Duckett Fishing and its products, said Duckett Fishing president and CEO Boyd Duckett.

“We are delighted to welcome Greg to Duckett Fishing. He is a terrific young, up-and-coming angler and a tough competitor, and that’s extremely important,” Duckett said.

“But equally important is the fact that Greg is personable, he’s highly professional and he understands the value of promoting his sponsors. He brings a high level of credibility and is a great addition to the Duckett Fishing team.”

Vinson is an eight-year pro competitor. During his seven years of Bassmaster Elite Series competition, he is a four-time qualifier for the Bassmaster Classic, and he finished second in the event at the Red River in 2012. Prior to his years of Elite Series competition, Vinson competed for one season on the FLW tour and qualified for the Forrest Wood cup. Additionally, he is a four-time qualifier for the Toyota Texas Bass Classic.

“I am really excited to join the Duckett Fishing team. Boyd Duckett is a winner. People within our industry know that when Boyd is involved in a project, it will be done the right way. They know that Duckett rods and reels are made with attention to detail and quality workmanship,” Vinson said.

“For me, one of the most attractive things about Duckett Fishing is the pro-driven concept. Boyd listens to what the pro staff says, and he oversees the development of rods and reels based on the input he gets from the pro anglers,” Vinson said. “It’s exciting to know that I’ll be part of this team and will have the opportunity to provide real input.”

Duckett Fishing is a rod and reel manufacturing company in Guntersville, Alabama. Duckett Fishing, which began producing rods in 2010, quickly became known as the manufacturer of the world’s finest series of micro-guided fishing rods. Duckett Fishing’s signature white Micro Magic rods are the first full line production rods to utilize the latest in micro-guide technology. Duckett Fishing produces ultra-light, yet durable, rods that are superbly balanced and highly sensitive. Duckett Fishing now offers a wide variety of reels along with its micro- and conventional-guide rods for both fresh and salt water. Company founder Boyd Duckett is a former Bassmaster Classic champion and in 2007 set a then-record for BASS angler earnings in a single season. For more information about Duckett Fishing, visit: www.duckettfishing.com.