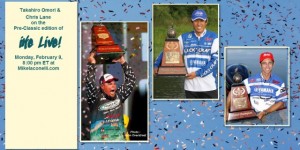 All three men will compete in the 2015 Classic on Lake Hartwell, Geenville, SC, Feb 20 to 22. Each knows the rigors of competition well.

Lane grew up fished family tournaments against his dad, grandfather and brothers, Bobby and Arnie—now pro anglers, too—before hitting the pro circuit in 2000. He won 13 Elite tournaments between 2005 and 2011, and he took the Classic in 2012.

For five years after high school, Omari lived in a tent on Lake Kawaguchi near Mt Fuji, Japan and worked odd jobs to saved money ($2000) to come to the U.S. for the Texas B.A.S.S. invitational. His 15-Year Career Plan called for him to compete at the highest level by 2001. He made that goal, entering the Classic that year and winning it in 2004.

Iaconelli stormed onto the fishing scene with four majors and earned close to a million dollars in earning his first five years of professional fishing. He took the B.A.S.S. Nation Championship in ’98, the Classic in 2003 and the Bass Angler of the Year in 2006, the only angler to win all three. He has qualified for the Classic 16 times.

Fans can receive an email reminder for the show by joining Ike’s Fish Heads Nation and can opt-in to the monthly newsletter for links to videos and periodic discount offers. They also can watch videos of previous shows at MikeIaconelli.com/Ike Live and watch or subscribe to clips on YouTube at Going Ike.

Audio versions of previous shows are now available on iTunes. To subscribe to the show, Click here and click “View in iTunes.” Choose iTunes as your application. Click “Subscribe” and new shows appear in your iTunes library automatically as they become available.

A South Philadelphia native now living in South Jersey, Mike Iaconelli fell in love with fishing at his grandfather’s side in the Pocono Mountains of Pennsylvania. He began fishing in tournaments after high school, joined the pro-am circuit in 1992 and turned pro in 2000. In 2003, he won the Bassmaster Classic. To date, he has won Bassmaster Elite, Classic, and Open championships, including the Bassmaster Elite on the Delaware River in August 2014, and earned over $2 MM in prize money.

He and wife, Becky, run The Ike Foundation, which provides fishing equipment to youth fishing club to “get kids fishing.” In addition, he and fellow fishing champ, Pete Gluszek, run The Bass University, which offers intense 2-day fishing classes that bring avid amateurs and professional fishermen together.