There’s no doubt that swimbaits account for a large number of big bass throughout the country each year. The realistic appearance, natural movements and feel make them a must for fooling giants. Big bass that are conditioned to eating large baitfish; such as gizzard shad, shiners, hitch, trout, kokanee or any other number of other species can be targets or swimbaits. 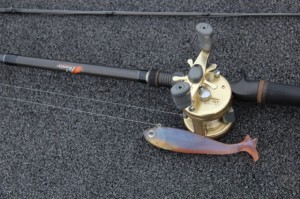 Most anglers have become acquainted with the effectiveness of swimbaits through watching professional tournaments on television. Big tournaments won by Steve Kennedy, Byron Velvick and Skeet Reese – on swimbaits – have shown how good they can be. However, because the professional success has been largely in the spring, most anglers equate swimbait fishing with the prespawn time of the year.

Certainly, swimbaits can be amazing lures in the prespawn. Big, hungry females tend to roam the shallows looking for a big meal to sustain them through the rigors of the spawn, and a swimbait represents that. Anglers who find solid prespawn area can merely employ a spinnerbait much like they would a spinnerbait, and the size of the bites can increase.
But, swimbaits can be great lures at other times of the year, and the fall to winter period is another one. Like other baits, it just requires some adaptation.

Why Now?
Swimbaits can be excellent lures this time of the year because of the bass’ need to conserve energy and eat fewer times. With the cold water and the cold-blooded nature of the bass, they don’t need to eat as much. One decent trout, or a big gizzard shad can fuel them for several days.

Because bass appear to be tuned in to the movements of larger baitfish, wily anglers present swimbaits to them in the most likely way to generate a response, slow and backwards. 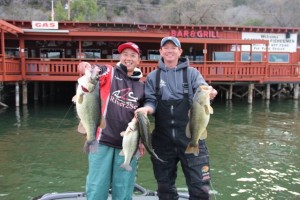 Backwards?
While we are using the term backwards, we are not referring to rigging the swimbait so that it can be retrieved tail first, we are instead referring to it being retrieved uphill. “Most anglers get stuck casting towards the bank and retrieving it towards deep water,” said former Bassmaster Opens pro Billy Hines, from Vacaville, Calif. “We’ve found that a lot of fish get caught – especially in the cold water months by positioning the boat shallow, casting out and retrieving the lure uphill.”

The “we” Hines is referring to is his tournament partner, another former Bassmaster Opens pro Preston Henson, also of Vacaville, Calif. Hines and Henson have made a career in their local events by targeting bigger fish, and the wintertime is no different.

“I’m just assuming, but it seems that the bass seem to be facing the other direction this time of the year,” said Hines. “I think that it’s because so many of their main forage bases live in open water. Trout, shad, hitch, etc. all swim the open water and come towards the bank to sun or feed, and that’s when bass pick them off.”
That’s when the duo uses slowly crawled swimbaits to get the big bites. He said they often put the boat in shallow water, anchor with their Power Poles and make long casts with a swimbait at 45 degree angles away from the bank.

What to Look For
Hines said that he looks for ditches in between points of small main lake pockets, or for indentations coming up the bank on a main lake walls. “I’m not talking about coves,” he said. “I’m looking for small pockets that bass can hide in and ambush baitfish swimming into or by the points on either side of the pocket.”

He does this on manmade lakes like Lake Berryessa near his Northern California home, or on natural lakes like Clear Lake, his favorite body of water to fish. He said that those lakes have a healthy population of heavy fish, and they are usually looking for an easy meal.

He said to look for funneling features of the banks. Points, ditches drains or creek mouths can all hold bass and the right habitat for funneling bait into their strike zones.

Swimbaits and Gear
Hines said that any swimbait with a lead head and a large jig hook protruding out of the back would work. He said they have used anything from Huddleston Deluxe Trout in clear water, to River2Sea Bottom Walkers in stained water. “The real key is that you want the head to be heavy, and have the right action for the water clarity,” said Hines. “The Bottom Walker has a lot of tail kick and seems better in stained water, while the subtle action and realism of the Huddleston is best in clear water.

Hines said he rigs his swimbaits on a 7’8″ iRod Jr Swim for lighter baits, and the 7’9” Large Swim for heavy baits. He prefers a 6.4:1 Lew’s Tournament MG reel because of its deep spool, and he spools up his reel with 20-pound-test Sunline FC Sniper Fluorocarbon.

He matches his swimbait size and color choices to the prevalent baitfish. “I like trout colors on trout lakes and shad type colors on shad lakes,” he said. “If the forage base is small, I use a four to six-inch bait, and go larger as I need to.” 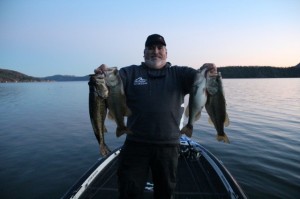 Vince Borges with a Big Bag of Swimbait Fish

Proof in the Pudding
Hines recently proved his point to a group of guests on Clear lake that included his sponsor at River2Sea Simon Chan, and friends Angelo Alorro, salesman for River2Sea and Phenix Rods Pro Staff Director Vince Borges. The group spent the day tossing swimbaits and Chan managed to catch his personal best, an 8-pound, 6-ounce largemouth that struck a River2Sea Bottom Walker 150 in the New Shad color.

The group caught several largemouth throughout the day over five pounds, including Hines and Chan boating a six pounder, to go along with Chan’s beast. “Bass eat a swimbait this time of the year too,” said Hines. “We just need to throw them right and wait for the fish to strike.”