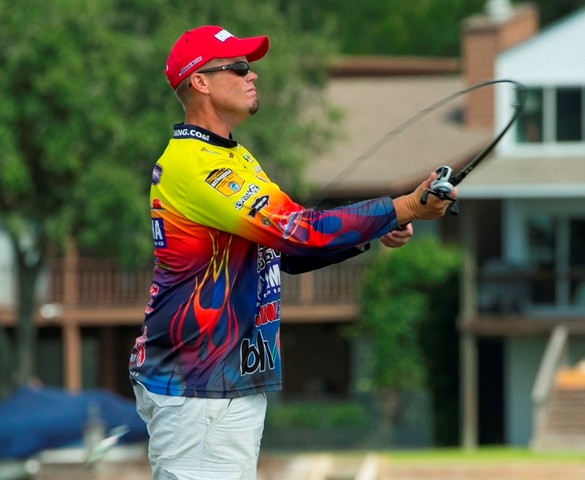 Keith Combs Makes a Cast during Day One of the Toyota Texas Bass Classic at Lake Conroe. (Photo by Jason Miczek)

Sunny skies and light winds started the first day of competition off right on Lake Conroe!

“Looks like perfect conditions for a jig today” said Gerald Swindle just moments before blastoff.  The water temperature was around 81 degrees.  2 1/2 hours into the first morning and a lot of anglers are on the move, running and gunning key stretches of bank that included docks, rocks, sea walls, and pilings.  Cloud cover was starting to move in the area for the first time today in the late morning.

First stop of the morning was with Elite Series Rookie Hank Cherry, who was fishing a variety of moving baits and covering water. Moving over to another spot, 2011 TTBC champion Keith Combs, was found hitting isolated spots where he had success in the past and making repeated specific casts.

As the live leaderboard showed just before noon, it appeared as though the last two TTBC champions, Bryan Thrift and Keith Combs were picking up right where they left off. Combs was off to a good start with, as many as eight spectator boats following him and a kicker all day.

Oklahoma’s Fred Roumbanis hit limit in the boat around 11:00am, then decided to switch things up and hunt for a big bite all afternoon.  VanDam had repeatedly made the same cast with three different baits whereas, David Dudley just appeared around the corner and began fishing the same type of water as Ehrler but using an entirely different technique. Ehler connected with a 6+ pounder but lost it after fighting it around the back of the boat. Edwin Evers was methodically covering water with two or three different baits.  FLW Cup Champion Randall Tharp had also pulled up about 100 yards away from Evers as Edwin swung a small keeper into the boat.

A TTBC victory would cap off any of these anglers already impressive seasons, today marked day one of their challenge.  Good first day for all the anglers which is great news for them, not so much for the bass.

COMBS IN THE LEAD

A glimpse back to 2011 TTBC, Keith Combs and Mike Iaconelli finished in a tie after each angler recorded a three-day total weight of 76 pounds, 12 ounces.  Two years later, Combs and Iaconelli are battling for the championship.  After day one, Combs leads the pack with a limit of largemouth weighing 24 pounds, 8 ounces, while Iaconelli sits in 2nd place with 21 pounds 8 ounces.

Combs raced to the top early in the game.  “I started running some of the stuff where I’ve caught them in the past, and I caught a good keeper on my first hole and my second hole,” said Combs.  “I landed my biggest fish on my third stop, but the whole situation about how I caught it was pretty crazy.”

After a midday flurry pushed his total weight to over 24 pounds, Combs said that he spent the majority of the afternoon hunting a giant.  “I just went to big fish areas because I didn’t want to burn a 4 pounder that I may need tomorrow,” said Combs.  “I was kind of surprised that I wasn’t able to upgrade late in the day.”

Mike Iaconelli spent the afternoon searching for keeper bites.  “It was a weird day today,” said Iaconelli, who finished the day 3 pounds behind Combs.  “I had a really good start to my day, a horrible stretch during the middle of the day, and a really amazing end to my day.”

After the sudden death loss to Keith Combs in 2011, Iaconelli would like nothing more than to remain within striking distance of Combs heading into Sunday’s final round.

Jason Christie reeled in a 9lb beauty to top the ATX Wheels Big Bass Challenge.  Christie sits less than a pound behind Iaconelli in 3rd place with a total of 19lbs 12oz.  After two FLW Tour victories and an Elite Series victory during the 2013 season, the Oklahoma pro entered the week as arguably one of the hottest anglers in the field.

“I actually caught it doing something where I didn’t plan to catch a big one. I was actually fishing for a limit (small keeper bass) and it was quite a surprise. I was expecting to catch two-pounders and a big one like that bites. I had a little old brushpile sitting out there that was in 20 foot of water where I had caught a lot of two-pounders during practice. So I pulled up there today, just trying to fill a limit, and that big one was in there.”

Also rounding out the Big Bass leaderboard is Kevin VanDam with an 8lb 6oz catch and Cliff Crochet with 6lb 5oz.  ATX Wheels will be presenting the ATX Big Bass award to the TTBC pro that catches the very biggest bass over the course of this exciting three-day world championship event.

The entire 50 angler field will launch tomorrow morning at 8:00 from Waterpoint Plaza on Lake Conroe (free to public).  On Sunday, the field will be cut to the Tundra 10 and the remaining anglers will compete for the 1st place prize of $100,000, a Nitro boat powered by Mercury, and the title of 2013 TTBC Champion.