TULSA, Okla. (July 28, 2016) – Brandon Fulgham and Brad Chappell are guides on Mississippi’s famed crappie waters like Grenada, Ross Barnett, Sardis and Washington, but they’re traveling to Oklahoma this weekend to try their long-lining skills where the technique is little known.
The two anglers plan to share the results of their efforts throughout the day, and then provide full details of the outing and the technique at a free public seminar to be held at day’s end.
The fishing day is scheduled for Monday, Aug. 1, beginning at 8 a.m. CDT. Hourly posts will be made to the Bobby Garland Facebook page from 9 a.m. – 3 p.m. The seminar is scheduled for Monday night, 7 – 8 p.m., at the Bass Pro Shops in Broken Arrow, Okla. 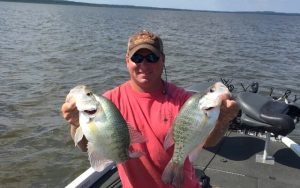 The destination is Lake Oologah, a 29,000-acre body of water located just north of Tulsa, Okla., and a place that has its own reputation of being a great crappie fishery. However, most anglers who frequent the lake are fishing with artificial crappie jigs or live minnows, and usually fishing directly underneath a boat, dock or bobber.

The long-lining technique involves using a boat’s electric trolling motor to trail artificial lures at about a long-cast’s distance behind the boat at speeds ranging from .8 to 1.8 miles per hour. The typical rig involves two jigs tied to the same line at about 24 inches from each other. Boat speed and size of jighead determine the depth of the lures.
“Long lining is great way to catch active fish and learn a lake’s most productive areas while doing so,” explained Chappell. “It’s especially effective when fish are suspended, 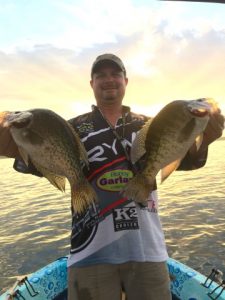 like they often get in the hot months of summer.”

Chappell said the technique can be as simple as holding a rod or two, or rigging up like Mississippi anglers often do in their home waters, using as many as 8 poles, varying in lengths from 7 – 18 feet, held in rod holders.
Neither Fulgham nor Chappell have ever fished Oologah, or even in Oklahoma, but they have taken their techniques to many places across the country. They’ve accepted this fishing opportunity invitation extended by local fishing tackle company Gene Larew Lures who makes the popular Bobby Garland brand of soft plastic crappie baits.
Since the purpose of the trip is more about how to catch crappie versus finding them, the anglers can get angler input on ramps to use, parts of the lake to fish and recommended colors, etc., from those who are part of the Crappie.com fishing community.

Crappie.com is considered the largest online group dedicated specifically to the species, and Oologah recommendations can be made to Fulgham and Chappell on the state forum board for Oklahoma.