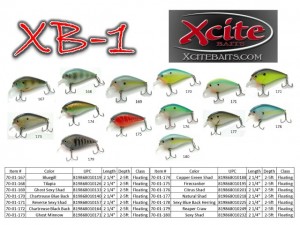 Xcite Baits, long a respected name in the world of soft plastic lures for tournament fishing applications, hereby announces that it has added hard baits to its lineup. The first lure in the series will be the Xcite XB-1, a squarebill crankbait that combines the best features of the competition at a price that few of them can match.

The XB-1 will feature premium components throughout, but its most innovative feature is a weight transfer system utilizing a tungsten ball bearing. The lure remains buoyant, but casts like a rocket.

“The XB-1’s weight transfer system will separate it from the rest of the field,” said Xcite pro-staffer Grant Goldbeck, a Texas-based veteran of Elite Series competition. “There’s nothing better than a shallow-diving crankbait when it’s windy, but with a lot of the smaller baits you give up accuracy when you’re casting in tight quarters, around laydowns and other heavy cover. This one goes straight like an arrow. You can roll cast it and lay it in softly, even from a distance, which allows you to stay back off the cover to avoid spooking the bass.”

Goldbeck also worked closely with Xcite’s designers on a palette of 14 color schemes that cover all possible water clarities and forage possibilities. Eleven of the patterns were developed with the assistance of renowned painter Custom Lures Unlimited. “For years many of us have bought our crankbaits and then sent them to a custom painter,” he explained. “That’s an additional $10 or $15 for each lure. Now you can have a custom product for $7.99”

“I have a squarebill tied on at every Elite Series event,” he continued. “It’s a confidence bait, one that you can use to fill out your limit or win a tournament. You can’t be competitive without one, and this is the best one I’ve ever fished.”

Leading tackle stores and online retailers will begin stocking the XB-1 the week of May 27th.