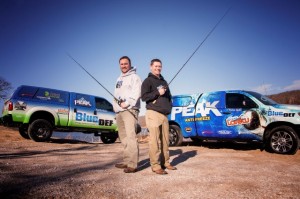 Roumbanis, 35, competes along the B.A.S.S. Elite Series and FLW Tour tournament trails. He has amassed more than one million dollars in tournament earnings since beginning a competitive bass fishing career in California in 1999. He now resides in Oklahoma.

Roumbanis, who relies on a Ford diesel pickup as his tow vehicle, will run a truck and boat wrap during the 2014 season that features BlueDEF Diesel Exhaust Fluid as his title sponsor and PEAK Antifreeze as a secondary sponsor.

Upshaw, 26, grew up in east Texas along the banks of Toledo Bend Reservoir where tournament fishing is considered a standard lifestyle. While attending college at Stephen F. Austin University, he became the first collegiate angler to qualify for and compete in the prestigious Bassmaster Classic in 2012 on the Red River near Shreveport, La.

Since graduation, Upshaw has relocated to Oklahoma where he works as a social media specialist in the outdoor industry and continues to complete in FLW Tour events and other bass tournaments. Upshaw’s Toyota Tundra tow vehicle and boat wrap feature the PEAK Antifreeze brand as his title sponsor and BlueDEF Diesel Exhaust Fluid as a secondary sponsor.

Both Upshaw and Roumbanis represent the new generation of young anglers who are mobile, competitive, communicative, and who have do-it-yourself mentalities. The combination is a good fit for the PEAK and Blue DEF marketing outreach efforts.

“Our company has a history of sponsorships, but mostly around motorsports activities,” said Sean Wheatley, senior brand manager for PEAK/BlueDEF. “We know for a fact though that those who enjoy the outdoors are also the same active Do-It-Yourselfers who like to change their own oil, antifreeze, and otherwise tinker with their trucks. Hunters and anglers are typically high mileage drivers who take pride in their vehicle care because they do so greatly depend on them for their passion sports participation.”

Wheatley went on to say that the Roumbanis and Upshaw sponsorships aren’t the company’s only recent testing of the fishing waters for PEAK and BlueDEF, pointing out another recent connection to tournament fishing.

“We’ve also become a sponsor of Major League Fishing. We simply believe fishing is a good fit for us and we’re excited to prove our interest in active outdoors enthusiasts through these relationships. I’m confident Fred and Andrew will represent us well on and off the water.”

For more information about PEAK, BlueDEF and other Old World Industries brands and products, visit www.OldWorldInd.com.