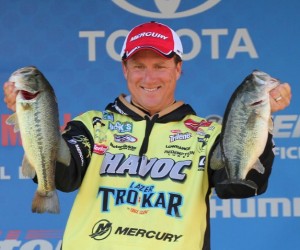 FLIPPIN, ARK. (February 16, 2015) – Legendary boat brand Ranger Boats will be represented by 16 of the world’s top professional bass anglers when the 2015 Bassmaster Classic is contested on South Carolina’s Lake Hartwell on February 20-22.

The highly anticipated event draws thousands each year, crowds that gather to watch the live weigh ins as well as to attend the Bassmaster Classic Outdoors Expo, which runs concurrently with the tournament. The Expo gives Ranger fans a chance to see the brand’s 2015 models and meet some of bass fishing’s luminaries.

In addition, boat buyers attending the 2015 Bassmaster Classic Outdoor Expo will be eligible for numerous sales incentives, giving them the opportunity to make their dream rig a reality. Several of the boats on display will include up to $2,000 in bonus benefits as part of Ranger’s “Gear Up & Go” sales promotion. In addition to the hottest Elite Series-ready fiberglass bass boats, the legendary boat brand will also showcase their ultra-popular aluminum line, which continues to deliver Ranger quality and attention to detail to a growing group of boat buyers.

Ranger founder and Bass Fishing Hall of Famer Forrest L. Wood is also scheduled to be present in the booth along with some of the greatest professional bass anglers to ever take to the weigh-in stand and other special guests. Visitors to the Ranger booth can meet and gain professional insight from this collection of pros, which boasts multiple Bassmaster Classic titles and millions of dollars in combined career winnings.

Appearing in the Ranger Boats booth:

Headquartered in Flippin, Ark., Ranger Boats is the nation’s premier manufacturer of legendary fiberglass and aluminum fishing boats, which include series of bass, multi-species, fish ‘n play, waterfowl utility and saltwater boats. Founded in 1968 by Forrest L. Wood, Ranger Boats continues its commitment to building the highest-quality, strongest-performing boats on the water. For more information, go to RangerBoats.com.