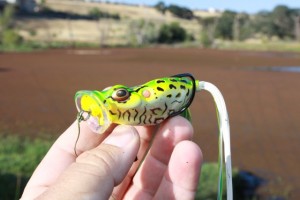 Topwater is most likely listed as one of the favorite techniques for the majority of the anglers.  If topwater is a favorite, then frog fishing can become an addiction.  There is something about seeing a big largemouth erupt from underneath a mat of vegetation that makes a heart skip a beat.

River2Sea’s Bully Wa was created to work in and around those mats, and at this year’s ICAST show, River2Sea will be releasing their cousin to the Bully Wa; the Spittin’ Wa.

Spittin’ Wa features a cupped mouth that is actually molded out of a clear material that is a little firmer than the soft material of the body.  River2Sea incorporated slots at the bottom rear of that cupped mouth to create jets of water that shoot backwards to create extra commotion.

The body of the frog is built on custom made River2Sea frog hooks that are actually a little bigger diameter, and are extremely sharp and stiff; there won’t be much bend in these hooks.  There is a small molded weight on the shank of the hook inside the frog, as well as a thin balancing weight on the belly of the body.

River2Sea incorporated the use of shrink tubing in the hook shanks as well to seal the body of the frog from water intrusion; which causes sinking.  They then added a drain hole at the rear of the frog so that air could escape during a strike to allow for compression.

Of course, Spittin’ Wa comes in eight of River2Sea’s great frog colors, and it has the round rubber tails that are left extra long for anglers to trim to their own tastes.  Spittin’ Wa will be officially released at ICAST and will be available in two sizes, a 2 1/4-inch version weighing 9/16-ounce and a 2 3/4-inch model weighing 7/8-ounce.

Check out the video below for display of product features, to see it in action, and get a few tips for fishing frogs more effectively. 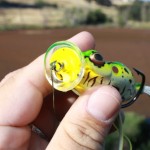 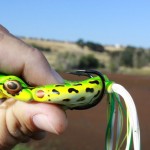 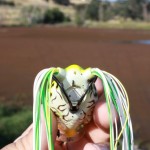 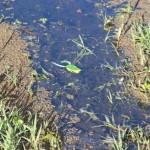 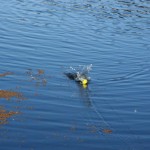