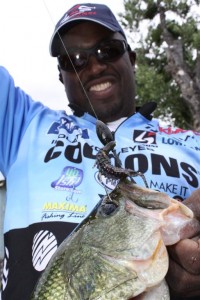 The heat of the summer brings to mind vacation, travel, the kids off of school and long summer nights with a barbeque and relaxing on the back porch.

For Bassmaster Elite Series pro Ish Monroe, it means that it’s time to get into the thick stuff. Monroe, the 38-year-old pro from Hughson, Calif. loves to get deep into the cover and slug it out with heavyweight largemouth.

He is known primarily for having two strengths in the fishing world; tossing his Snag Proof Phat Frog, and for his ability to pick apart shallow cover with his Flippin’ rod. So comfortable is he in the backwaters of a body of water, that the two-time B.A.S.S. winner seeks out areas that would leave most people searching for a shovel.

Junk Punchin’ Gear
Everything he does is geared for big bass and the heavy cover he probes looking for the big bite. His rod of choice is an 8’ Daiwa Steez Compile X Flipping Stick and a 7.3:1 Zillion Type R reel. He spools the reel full of 70-pound-test Daiwa Samurai Braid, then he slides a Punch Peg, a one ounce, or ounce and a half River2Sea Tungsten Trash Bomb weight and a Paycheck Baits Punch hook; which he ties on with a Snell knot. Add a creature bait to the mix, and Monroe is ready to punch the junk. 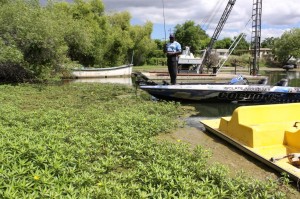 He chooses his colors based on the time of year and the forage that bass are eating. In the spring and fall; when crayfish are up around the grass, he’ll choose crawdad colors, but the summer is time for bluegill colors, and his first choice is a Watermelon / Purple tone, like Sprayed Grass or a new favorite; Smoke Green Pumpkin.

When he first starts out, he begins with just the weight and the creature bait, but as he starts getting bites, he tries adding a Paycheck Baits Punch Skirt in a corresponding color to see if it produces bigger bites. “I always have both tied up, and if I feel like the Punch Skirt will get me bigger bites, I can always try it,” he said.

In Their World
Monroe likes to find what he calls the thickest cover available to him in a given area. The reason he said is similar to how humans feel about their own homes. “When a bass is hiding in the thick cover, he’s at home,” Monroe said. “If I’m sitting in my living room when a big thunderstorm comes through town; it’s likely that I’ll feel pretty comfortable. But, if I’m stuck outside of my home, I might feel a little jumpy.” 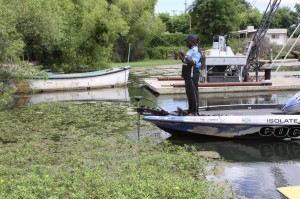 Armed with that bit of knowledge, Monroe said that he will venture into the nastiest cover and not worry too much about how he gets there. If it means he needs to scuff the sides of his Ranger getting in there, run his MotorGuide on high to chop weeds or fire up his Yamaha to get over an obstruction; he’s not too worried about it.

“I can drop big weights on top of their heads and make big splashes with the weight through cover, and most of the time, its fine,” he said. “In fact, I think that it often helps to have them find the lure coming though the matted vegetation.”

Reaction Flippin’
When he is searching for bass in the thickest junk he can find, Monroe believes that 95-percent of the bass that strike will do so on the initial fall through the mat. His approach is to pitch his bait to the cover and let it plummet through the vegetation. He maintains contact with his lure by keeping his line taut to make sure he feels the bite as it falls, then sharply loads his rod and begins dragging the bass through the cover.

On the rare occasion that he needs to slow down, Monroe still covers water fairly quickly; usually pumping the lure once or twice before bringing it out to make another pitch. “The only time I typically slow down is in cold water, but even then, I’m looking for a reaction bite,” he said. “When the water’s hot; I try to keep moving and pick the areas I think I will get the biggest bite from first before expanding into the rest of the mat.”

Tips for Success
The first thing Monroe recommends to anglers is that they commit to the technique, and they do it all day. “It’s the kind of technique that will produce 16 pounds and then a six pounder, and you’re all of a sudden at 20 pounds,” he said. “If you only do it sporadically throughout the day, you’re not giving yourself a chance to take advantage of everything it has to offer.”

He also suggested that anglers look to the heaviest part of the cover first. “The biggest bass in that mat is usually in the heaviest cover, with the most variety of vegetation,” he said. “If I pitch to the thickest part of the cover first, I have a chance to catch the biggest bass there. But if I catch a smaller fish, I might spook the one I really want.” 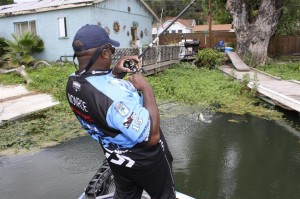 The other thing he said is to fight fish quickly with the rod and use the reel only to gather the line. “You really want to drag the fish out of the cover quickly and not give it a chance to get a foothold,” he said. “By playing them too much around the boat, you give them a chance to come off.

“My biggest limit of bass on a Punchin’ Rig was over 30 pounds, and I bounced every single one of those fish,” he said. “Get the hook in them and keep pulling. Once you get control, don’t let go and you’ll land more fish.”