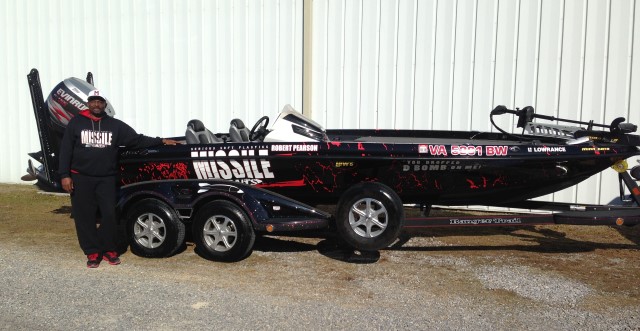 Robert explains, “John and I go way back. When the Missile Baits came out, I got my hands on some and put them right into my boat. It is going to be a lot of fun working with John and talking about fishing Missile Baits. They sure enough catch fish and we all like doing that more.”

“Robert and I have known each other since I was in college,” states John Crews, company owner and fellow pro staffer. “We met at a regional team tournament championship and immediately became friends. We keep in touch and both fished the FLW Tour together for a few years. Robert always represents himself in a very professional manner and is a great representative for any company. We are glad to have him on and know that he will bring Missile Baits very positive exposure.”

Missile Baits has also added FLW Pro angler, Rich Lowitzki. Rich has been competing on the FLW pro division for 9 years and has accumulated over $141,000 in FLW earnings. Lowitzki has been an avid fan of the baits since they came out. Currently Missile Baits is represented on the FLW Tour by Ish Monroe on the pro division and Rick Sweadner on the co-angler division.

MISSILE BAITS is a small company dedicated to creating SERIOUS soft plastic baits to help anglers catch more fish. The designs are straight off the top-level professional bass tour. Based in Salem, Virginia, MISSILE BAITS works relentlessly to make the best baits, show their customers how to use them, and stay on the cutting edge of bass fishing. New products and videos will continue to blast off. Log onto www.MISSILEBAITS.com for videos, tips, forums, and more.