Beyond the Pond – Shirley Brauer

Bass fishing is one of the few sports that have competitors ready for action in the dark of night. The earliest break of light finds anglers launched, lined up and awaiting blast off before the first rays of daybreak have even skimmed the water. On any given tournament morning, silhouettes of lone anglers darken the horizon as the illumination of safe light, gives the green light to the pro fishermen.

The image of the unaccompanied angler waiting alone in the cockpit of his boat, then racing off into the morning to spend the next eight hours isolated from everything but the bass doesn’t necessarily portray a true illustration of what being on the pro bass tour entails.

Before the fishing begins and long after it ends, beyond the pond and behind the angler stands the curator of his business, and partner to his success. While professional angling might appear to be a single-handed adventure, the angler’s “team” can be vital in their path to victory. Some may have hired help, some may rely on relatives, but many pro anglers proceed through their career with the support of their wife as their teammate.

This is the case with Bassmaster Elite Series pro Denny Brauer and his wife Shirley. Their more than three decades together has been forged through Brauer’s more than years 30 years of competitive fishing. 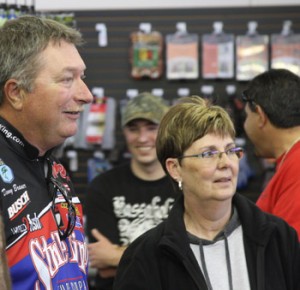 Remembering the couple’s first meeting, Mrs. Brauer’s stated, “Denny’s love for water sports was immediately evident.” She met him as she sunbathed lakeside on a Independence Day weekend while her soon-to-be beau and his buddies arrived with a beach landing on water ski’s to extend an invite to a house party. Although during their subsequent courting days she knew of Brauer’s angling enthusiasm; she had no way of knowing that fishing would be the focus that her future would hold.

As a 9 to 5 bank teller, she settled into married life with a union mason, but had her misgivings when her husband’s union disbanded resulting in his 1980 announcement that they would be moving from Nebraska to the Lake of the Ozarks in Missouri, to pursue becoming a full-time angler. The decision at first left her thinking that “he was nuts,” however, she now admits; “he proved me wrong.”

Realizing it may be tough going, they decided to give it a three-year trial. Mrs. Brauer explained, “Our deal was he would have to make it by the end of 1984 or have to give up and get a paying job.” That year proved fruitful as Brauer brought home his first, championship paycheck from the Bassmaster Texas Invitational in March 1984. She stated, “That win was a relief, financially.”

Having no regrets the turn their lives took as they followed her husband’s passion, Mrs. Brauer is genuinely appreciative of the life fishing has given them. “The sport has been good to us, it has provided us a good living,” she said. “It has proven to be a financial blessing to us through the years.”

Mrs. Brauer has spent the majority of the time on the road with her husband, and counsels other wives; if they have the choice, choose to travel with their husbands on the tournament trail. She has helped build her husband’s career into their livelihood while being present to offer support and assistance whenever needed. She strongly stresses the importance of being behind your husband. She stated, “The girls must be very supportive, you have to have a family’s full support to be a success.” She continued to explain, “The sport has a lot of ups and downs and as a wife of an angler, and you must go with the flow and try not to get down.”

The advice she shares with other wives is to try to remain encouraging, “Know it is not always going to go well and try to keep your spirits up with a positive outlook, these will help you learn to deal with the disappointments.” Behind the scenes travel plans, reservations, bookkeeping, sponsorship, exposure and purchases are all matters that need to be attended to without interfering with the concentration of fishing.

Mrs. Brauer believes in “taking care of as much of the business as she can for her husband”. Her day involves getting up early, helping him get organized, waving him off at blast off and being present at weigh- in. When he’s on the water, she takes care of business matters, organizes for the next day, picks up more tackle if needed, gets dinner ready and early to bed is a typical day on tour for her. One of her personal enjoyments, if there is time, is lunch with the other wives, or gathering with them at parks so the kids can play.

Although it is not a typical existence; nor one she pictured for herself, living the life of a tournament wife has been good, and she shared she wouldn’t change a thing. It proved to be such a positive experience, as a mother she did not even frown upon the decision that their son, Chad made to follow in his father’s footsteps as a fishing professional.

The move was something she saw coming, as he had been on the water since he was a baby and was given his first jon boat as a youngster. Believing in the value of attending regular school for education and social growth, the Brauers decided that Chad didn’t travel with his parents full-time during his school years. He remained with his grandparents and was allowed the choice of one tournament trip every season. With education being a top priority for the family, regardless of his choice of profession, the Brauers did have the expectation that their son would attend college. Chad obliged and earned a degree in Fisheries and Wildlife prior to going pro.

Reminiscing of the time she has spent in the life, Mrs. Brauer talked fondly of the tournament trail travelers and remarked how they know more people on the road than they do in town. She looks forward to seeing each of them through the tour. She explained, “We are all friends and give each a lot of support and understanding.”

Brauer’s Elite pro career has led him to the Classic twenty times and the title of the Bassmaster Classic Champion in 1998. When he won the 1998 FLW Tour Angler of the Year title, he earned the distinction of being the first angler to grace the front of a Wheaties box. That honor, along with the Classic win, Mrs. Brauer claims as two of her proudest moments. Describing the “Breakfast of Champions” honor she stated, “It is still framed and hanging in the office.” 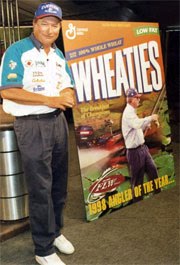 When discussions of retirement crop up, Mrs. Brauer imagines their life will be much the same; traveling to fishing destinations throughout the country. The only difference she foresees is each stop on their journey won’t be dictated by a tournament circuit.

Whether their voyages take them on a trip of fun fishing or amidst the competition of the Elite Series circuit, the Brauers make a remarkable team and are an inspiration in the industry.

For More on the Brauers, visit their website at www.brauerbass.com