Fall Cranking with a Twist–John Crews 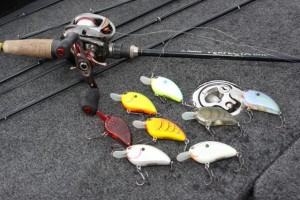 Welcome to fall, the boon or bust time of bass fishing. Find the location with the right factors and you can load the boat; but miss the mark, and you’re in for a long day.

John Crews, a Bassmaster Elite Series pro from Salem, Va. loves the fall. “This can be one of the most exciting times of the year to fish,” he said. “The bass can be so active that they can often be literally fighting over the bait. But, it can also be a very though time to fish if you don’t know what you’re looking for.”

Crews said that he relies primarily on two separate, contrasting applications to produce for him this time of year. “I really like to have to complementary techniques that I know will produce,” he said. “Because bass will stack up on specific things, they will often get closed mouths and simply not bite. They’re still there, but they need a little coaxing.”

With that in mind, Crews likes to have one of his namesake SPRO crankbaits ready, but he is also ready with one of his Missile Baits offerings should things get tough.

But, because he mentioned it several times, let’s examine what the key component to fall fishing is. That key is locating the bass, and to locate the bass; especially in the fall, you have to locate the bait.

Bait is Key
Once the air temperatures begin to dip in the fall, baitfish begin to move towards the backs of creeks, coves and river arms. The reason assumed by anglers across the country is that as the main lake receives less boating pressure and power generation, their food sources begin to suffer. Shad follow the running water upstream to find the most abundant source of forage.

Bass do the same thing. Their main forage base moves, and so do the bass. “I’m not a biologist, so I wouldn’t want to speculate on what the true reason is,” Crews said. “But, what I do know from experience is that bait moves upriver, and bass can be caught there, so that’s where I go.”

He often finds a motherlode of bass where he finds clouds of bait, so, he tries to locate vast schools of shad. Aside from visibly seeing schools of bait, he knows that several factors help him locate shad. “What I’ve noticed is that the shad are often in the stained water,” he said. “So, I tend to look for creeks that have stained water.” 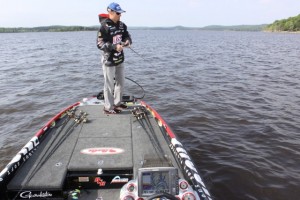 Anywhere that these factors match up with some sort of cover or structure element, he begins his search.

Object Oriented
Crews said that he likes to look for one of two types of areas to begin his search. Those two areas are flats with cover elements and steep, rocky, channel swing banks. “Channel swing banks are the most obvious, so they receive the most pressure,” he said. “With that in mind, I prefer to look for isolated cover on shallow flats. I look for stumps, brush, rocks or grass clumps. When I find those with bait around, I usually find bass.”

That is where Crews begins his search.

The Attack
Crews’ first plan of attack involves his SPRO Little John crankbaits. In water shallower than three feet with sparse cover, the original Little John is the choice. In the same depth range with heavier cover, he opts for the Fat John because he said that it comes through cover better and he can use heavier line on it. In water from three to five feet, he opts for the medium diving Little
John MD, and if the water is a little deeper, he turns to his Little John Baby DD crankbait. “It’s a system that works for me,” he said. “I have the tools I need for each depth zone and cover type.”

Because the shallow running cranks are going to be used primarily around cover, Crews said it is best to use a Copolymer line. “I use Vicious Ultimate Copolymer because it helps with the abrasion resistance in shallow water,” he said. “But, when the water is deeper, I want the better feel, so I go with Pro Elite Fluorocarbon.”

For the shallow running Little John and the Little John MD, he uses a 7′ Pinnacle Perfecta DHC5 cranking rod that he matches with a Pinnacle Optimus LTE in 6.4:1 retrieve speed. He uses 10-pound-test Ultimate Copolymer for both applications. When he is using the Fat John, he upgrades to the medium-heavy squarebill version of the Perfecta DHC5 series and upsizes to 14-pound-test. 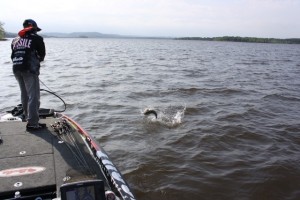 He varies his retrieve to find what the bass are looking for. “As a rule of thumb, the dirtier the water, the slower the retrieve, the clearer the water, the faster the retrieve,” he said. “But, I play with pauses and twitches to find what they respond to, and then make mental notes of what they bite best so that I can duplicate it. I also want to make as much contact with the cover as I can.”

Fallback Twist
Crews said that once he finds active bass, he can often throw his crankbaits all day long. That is unless bass have been getting hammered by fishing pressure. Then, he has a backup plan at the ready. “If I’m in an area that I know is holding fish that won’t bite because they’ve been getting pounded, I turn to a dropshot rig,” he said. “It’s a great way to get bites from inactive or pressured fish.”

He prefers to use a finesse dropshot rig in this instance, especially if the cover is sparse. He turns to a Pinnacle Perfecta 7’2″ medium action rod, an Optimus 40 spinning reel spooled with 6-pound-test Vicious Pro Elite Fluorocarbon. He uses his Missile Baits Drop Craw in baitfish imitating colors like Nattie Light, Oxblood Red Flake or even Pinkalicious. “These are the perfect little baits for triggering strikes from inactive bass,” he said. “It looks like a little minnow darting around, and they just suck it in.”

He said he chooses a cylindrical dropshot weight in 1/8-ounce in water shallower than five feet, and then uses 3/16-ounce in deeper water. His hook choice depends on cover. If there is some brush around, then he uses a size 1 Gamakatsu Rebarb hook, then turns to a size 4 Gamakatsu Octopus Hook if there is little cover or some rocks.

“I make medium length casts and drag the lure around back to the boat,” he said. “I let the retrieve itself create the action in the lure.”

Wrap Up
Crews loves the fall, but he suggested that anglers keep an eye out for things that will let them know bass are there. “I look for subtleties amongst the masses of bait to try and make the most of the situation,” he said. “But, if people will just make sure that the bait is there, and let their lures work for them, they can’t help but catch bass. After they start getting bit, they can refine things from there.”